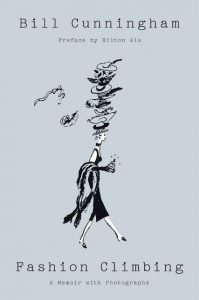 If you’ve ever seen Richard Press’s magnificent 2010 documentary Bill Cunningham: New York, you know that its namesake wasn’t a man with many idle moments.

Cunningham—who spent forty years as a fashion and society photographer for the New York Times—was on the street all day, on the scene all night, and in the editing room first thing in the morning. Perhaps he made a brief stop home to his undersized and overstuffed Carnegie Hall studio apartment in between.

So it is truly a revelation that Cunningham, who died in 2016, somehow found the time to leave behind the memoir that was discovered among the million-dollar trove of artifacts discovered in that historic, rent-controlled shoebox of a home.

As Matthew Schneier reports for the New York Times:

For the devotees of Mr. Cunningham who faithfully followed or appeared in his “On the Street” column (“We all get dressed for Bill,” Anna Wintour has said), this discovery amounts to a major archaeological revelation.

“It seems so unexpected,” said Christopher Richards, an editor at Penguin Press who acquired the book at auction. “He really didn’t divulge anything about his life to his friends and his colleagues. He was so private. I think it was a shock.”

It is not clear when Mr. Cunningham wrote the memoir, which he called “Fashion Climbing” and left as a pair of clean typescripts, though multiple drafts of certain sections also found in the archive suggest he revised it.

The soup-to-nuts memoir spans from his already-fashion-minded youth in Boston, through his service in Korea, up to his time as a renowned journalist. Through it all, Cunningham seems keenly aware of, and reflective about, the stigma that came with his role as a man devoted to fashion.

As the book’s acquiring editor suggests, the fact that Cunningham’s family never approved of his career—well that, plus a tiny bit of fashion industry and society gossip—was perhaps one reason the beloved photographer never published the memoir during his life.

Fashion Climbing is expected to publish in September.