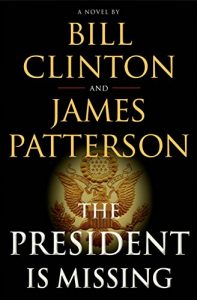 Ya heard? President Bill “The Comeback Kid”* Clinton is teaming up with James Patterson to co-author a new book called The President Is Missing — a novel, alas. It will be co-published by the authors’ respective houses, Knopf and Little, Brown, in June 2018.

While it’s of course commonplace for US presidents to write memoirs of their years in office—and for potential candidates to publish books in advance of their campaigns—this will (I think?) be only the second published work of fiction by a president, the first being Jimmy Carter’s historical novel The Hornet’s Nest.

According to the press release, The President Is Missing promises “a unique amalgam of intrigue, suspense and behind-the-scenes global drama from the highest corridors of power. It will be informed by insider details that only a President can know.”

Not a lot of other details yet, and it sounds like a logistical headache (how will this work, even — a joint publication between two Big Five houses with their own contracts and editors and designers and sales and marketing teams and publicists?), but we can expect a pretty tight pre-pub embargo and mind-boggling sales when the book finally comes out. “This is a blockbuster collaboration between two bestselling authors,” publishers Sonny Mehta and Michael Pietsch said in a statement, and “a book that promises to entertain and delight millions of readers around the world.”