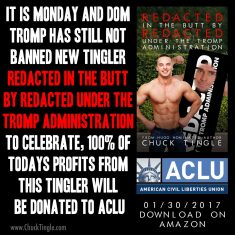 Are you a best bud? Are you a buckaroo that knows yourself and loves yourself for being the best you that universe could ever know?

If the answer to either of those questions is yes, then you must be familiar with the pleasure of reading Dr. Chuck Tingle. Niche author of such classics as Space Raptor Butt Invasion and Chef Wooly Mammoth Eats My Butt, Dr. Tingle (a pseudonym) writes fantasias that parody the modern erotica scene.

But lately, Dr. Chuck Tingle has been more political than usual. In his pre-inauguration story Domald Tromp Pounded In The Butt By The Handsome Russian T-Rex Who Also Peed On His Butt And Then Blackmailed Him With The Videos Of His Butt Getting Peed On, he explores the controversy of Donald Trump’s alleged wild night with Russian prostitutes in Moscow. Tingle’s fans had their own theories, like this one, from a redditor named Schmucko at his Reddit AMA last month:

Dr. Chuck Tingle! My first question to you is: have you considered that the attraction between Domand Tromp and the Russian T-Rex might be a result of their mutual small hands?

But I thought that Domald Tromp was a Crab Monster? Do crabs fly out of his butt in your new novel? Are crabs communicable across species and extinction status?

Also, congratulations on your Hugo nomination, I hope the new one wins you a Pulitzer this time!

To which the author responded:

i had not considered this small hands way but this is probably false as in most timlines DOM TRUMPS has fake hands to cover his claws and tentacles. to anwser yoru important question about Void Crabs they are a pile that crawls through the spaces between The Void i hope this anwsers your qestion

I guess we’ll just have to read to find out. And we can do so without guilt, because all proceeds from this new book (at least until January 30th) are going to the ACLU.