Hello, smart MobyLives reader! Because you are so smart (you’re here, aren’t you?), we understand the type of content you’re really after: that sweet, sweet, super-newsworthy grammatical content. Well, friends, rest assured: we and Benjamin Dreyer, copy chief at Penguin Random House, have got you covered. 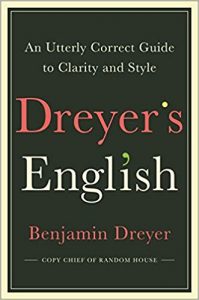 Please enjoy the gleeful and mischievous punctuation swap on this cover

If it’s somehow possible that you are not as excited about new grammar publications as, say, our erudite and friendly director of production, allow us to fill you in: Dreyer just published Dreyer’s English: An Utterly Correct Guide to Clarity and Style. Think of it as Strunk & White’s The Elements of Style, but actually still useful. It’s also on the New York Times bestseller list, because nerds everywhere deserve happiness, too.

Dreyer has been the head copy honcho at PRH for about 20 years, and his beloved stature as a social media grammarian is well earned. He is, after all, known for this bit of wisdom:

All of copyediting is this:

• Only godless savages eschew the series comma.
• Don’t use apostrophes to pluralize words.

The rest is commentary. #CopyeditingProTip

Earlier this week, Dreyer sat down with Terry Gross at NPR, and shared some of his knowledge:

Dreyer also talks about how it is perfectly acceptable—and, actually, utterly humane and mature—to refer to those who identify as non-binary as they. And he speaks at length about how he initially struggled with that seeming grammatical disconnect—and how he ultimately cured himself of it.

Perhaps his best bit of advice is for editors to manage expectations. “I think that a good rate of acceptance between copy editor and author may be 85 percent of the copy editor’s suggestions would get approved,” he told Gross, adding that the author’s preference has a great deal of power and sway “because you know who’s the dog and who’s the tail.” And he lavished praise on the profession of copy editor (Dreyer began as a freelance copy editor, before becoming a production editor at Random House in 1993), saying that a good copy editor knows that they are enhancing the author’s writing style, “make it … more of itself than it was before you got to work on it.”