Would you call causal transphobia “cheerful vulgarity” or inexcusable discrimination? Writer Gareth Roberts has discovered the consequences of oversharing on social media when tweets he made back in September 2017 cost him a book deal.

Roberts, who has previously written episodes of Doctor Who and authored Whovian books, has been axed from BBC Books’s forthcoming anthology Doctor Who: The Target Storybook after fans of the cult television show took against him. According to a statement Roberts put out on Medium after the news of his dropping broke, he claimed, “Dr Who fandom agitated for my removal.” He also went on to say “some of the other contributing authors to the book (I don’t know who) threatened to withdraw if I was involved. BBC Books immediately folded to these demands.” 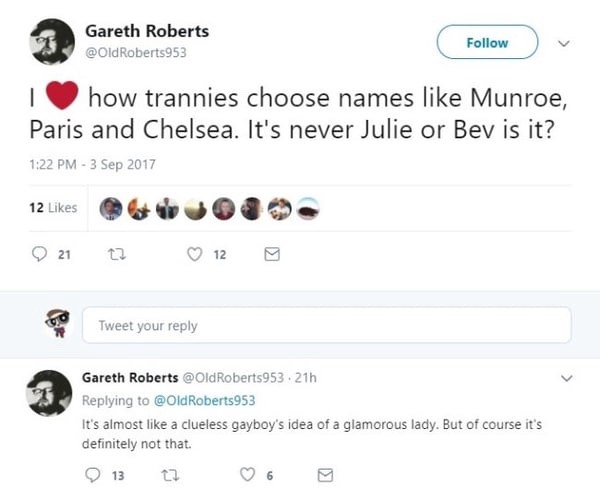 Back in 2017 Roberts tweeted “I love how trannies choose names like Munroe, Paris and Chelsea. It’s never Julie or Bev is it?”, continuing: “It’s almost like a clueless gayboy’s idea of a glamorous lady. But of course it’s definitely not that.”

He justified his comments on Medium by calling them “cheerful vulgarity.”

Recent Twitter responses have exploded, both in condemnation and in support of Roberts. With trannie being such a derogatory term, many call his language inexcusable. Writer Susie Day, a contributor to the forthcoming anthology commented:

“I raised my concerns, and said if he was in, I was out … BBC Books made their decision. I’m grateful they took the opportunity to demonstrate that transphobic views have no place in the Whoniverse, both in and outside the stories.”

So, since That Doctor Who Writer's blogged about it: I’m a contributor who questioned GR’s inclusion in the anthology, on account of him being a vocal transphobe, amongst some other views he found in the bin. (I don’t know if any of the other writers were involved.)

The first trans actor to appear in Doctor Who, Bethany Black, also supported BBC Books’ decision tweeting: “Gareth Roberts lost his spot in a Doctor Who anthology because of transphobic comments he made. Good.”

On the opposite side, journalist Toby Young, associate editor of conservative magazine The Spectator, considered Roberts’s treatment as“shocking” and “an affront to free speech.”

This is shocking. It’s one thing for a commercial publisher to muzzle an author for their dissenting views on transgenderism. But for BBC Books to do it — a publicly-owned company — is an affront to free speech. Why should everyone pay the license fee if some views are censored? https://t.co/AscO0XEApw

Roberts only went on to add fuel to the fire in his Medium statement, saying:

“I don’t believe in gender identity. It is impossible for a person to change their biological sex. I don’t believe anybody is born in the wrong body.”

“Like every other reasonable person I deplore and condemn any violence, intimidation or discrimination against any person for their beliefs or for how they present themselves, or indeed any other reason.”

While I guess we sadly cannot stop people’s backward, hateful personal views, for God’s sake, if you are in the public eye, think before you share public content and don’t get upset and defensive if your opinions cause backlash and have consequences.

A spokesman for BBC Books said, as reported by Alison Flood at The Bookseller:

“Ebury Publishing will no longer feature Gareth Roberts’ work in the soon to be published Doctor Who: The Target Storybook. Comments made by the author on social media using offensive language about the transgender community have caused upset to Doctor Who fans and conflict with our values as a publisher.”