Barbara A. Radnofsky, author of A Citizen’s Guide to Impeachment, on high crimes and misdemeanors 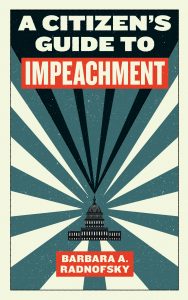 Get your copy now!

If ever there was a time to read up on impeachment, it’s now.

That’s right, the time has finally come: the House votes today on whether to move forward with an impeachment inquiry.

What does that mean? Read Barbara Radnofsky’s A Citizen’s Guide to Impeachment to learn about the rules and history of impeachment. Get an overview here and watch below to learn what exactly high crimes and misdemeanors mean.

What are some examples of high crimes and misdemeanors provided by Trump, you ask? Radnofsky thoughtfully provided a list:

Betrayal of trust and violating his oath of office to preserve, protect and defend the US. Allowing/failing to defend against ongoing foreign attacks on US democratic/electoral systems.

Failing to “faithfully execute the office” of POTUS  by incompetently gutting the diplomatic corps/State Deptartment and other key departments.

Negligently choosing, retaining, and supervising badly performing high officers and agents, including Hatch Act law-breakers who misuse their offices for political benefit, and retaining corrupt and incompetent  officials and lawyers to accomplish his misdeeds.

Accepting gifts, intellectual property, and other things of value creating conflicts of interest in his presidential decision making. In impeachment, this is also called “denying the public’s right to honest services of the office.”

Engaging in “oppression,” impeachable misconduct per the Constitution’s framers. He openly preaches hatred and intolerance, discriminating  along religious, racial, and other improper bases, promoting violence, hatred, and stochastic terror, with victims including his perceived political enemies and the free press.

Violating separation of powers among our three government branches, interfering with witnesses in all branches and with valid, congressional hearings and subpoenas.

Abusing his pardon power, influencing witnesses, and thwarting the rulings of federal courts, violating separation of powers with the Sheriff Arpaio pardon, reversing a federal court contempt ruling. He claims to have the right of a tyrant to self pardon.

Deceiving the public about ties to foreign powers and conflicts of interest. The Mueller Report details Trump-Russia business efforts, including towards a Trump Tower Moscow. Yet, Trump proclaimed “I have no dealings with Russia. I have no deals that could happen in Russia, because we’ve stayed away … So I have no deals, I have no loans and I have no dealings. We could make deals in Russia very easily if we wanted to, I just don’t want to because I think that would be a conflict.” His lies include claims he ”stayed away,” from Russian dealings, admitting conflicts of interest would prevent it.