Barack Obama’s memoir crowds in on Booker Prize announcement, everything else 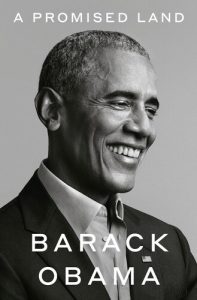 If you’re wondering why we haven’t exactly reported on one of the biggest publishing stories of the year–the nuclear blast to the publishing landscape that is Barack Obama’s A Promised Land memoir, set to detonate on November 17th–it’s because, so insider is our knowledge, we covered it before it was really a story.

The Crown imprint of Penguin Random House has since announced it will indeed be rolling out a 3 million copy print run of the book in an already tight publishing season, densely populated by books that had been pushed back from the early months of Coronavirus lockdown.

Until we get the early reads, and “top ten takeaway” reviews, the story of A Promised Land remains the sheer gravity it will exert on the industry.

As our original piece noted, you could feel the tectonic plates moving underfoot as Penguin Random House moved a considerable amount of space around the Obama launch.

Further, the memoir comes at a time of chaos at America’s book printers–owing to the crunch of books delayed by Covid, increase in backlist sales with more people reading the classics at home, and boardroom politics of mergers and acquisitions in the industry–and the drama of its publication is both a cause and effect of that chaos. As Elizabeth A. Harris writes for the New York Times, Crown recognizes this, and “plans to print about 1 million of those books in Germany and has arranged for three ships, outfitted with 112 shipping containers, to bring those copies to the United States.”

But enough with the inside baseball, the mega-book is starting to have its effect on more reader-facing aspects of the business. As Shelf Awareness reports, the Booker Prize announcement, originally slated for D-Day in the Obama launch, has been moved back  to November 19. But even that clever move comes with its own bit of chaotic overcrowding as the National Book Awards are set to be announced for November 18.

It remains to be seen how much oxygen will exist for November books after Obama’s launch, and whether the Booker and NBA winners will get to experience their usual sales boost. But keep an eye on those lists, and do your best to read beyond the biggest book . . . ever. Not least because you may need a tonic for contemporary electoral politic blues–a malaise for which I might say thanks, Obama–come November.