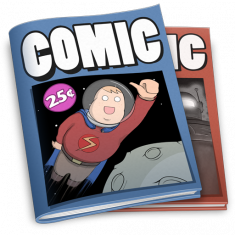 It’s a buddy cop premise gone wrong. According to Brian Rogers at the Houston Chronicle, former partners and Harris County District Attorney’s office investigators Dustin Deutsch and Lonnie Blevins allegedly stole hundreds of thousands of dollars’ worth of sports collectibles and comic books that were being held as evidence in an embezzlement case.  The crime went down like this:

In the embezzlement case, Blevins and Deutsch were investigating a con artist posing as a lawyer who stole from international crane maker Tadano. With his ill-gotten gains, the con man bought millions of dollars in collectibles to launder the money. Blevins and Deutsch stole the comics from one of his storage units.

During his testimony, Blevins said they thought the comic books were untraceable. But because they were so rare, investigators were able to show that Blevins sold some of the comics at trade shows in San Antonio and Chicago.

Rule #1 of Crime: never underestimate the watchful eye of the rare books collectors! No indeed. Deutsch was convicted in early March and sentenced to five years in prison, after Blevins testified against him in court. Some partner!

Last week Rogers followed up on the story, as Blevins was sentenced to five years probation and over $150,000 dollars in fines. That is, he received quite a bit of leniency for his testimony against Deutsch.

Rogers adds in an entirely unexplained sentence: “It was a good resolution for Blevins, who can still travel around the country in his new career in the oilfield, his attorney said Wednesday.” But to loosely quote Brecht, what is the greater crime? The stealing of a book? Or an honest day’s work in the oil industry?