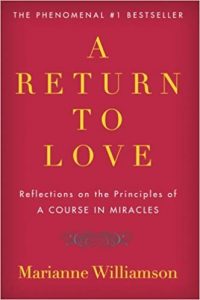 In all kinds of blog posts past, we’ve seen the line between author and politician (and politician-adjacent) blurred.

Now, a best-selling author—who also has the ear of Oprah on spiritual matters (say, that sounds a lot like the set-up of Ross Simonini’s novel Book of Formation)—is seeking a mega-promotion: to President of the United States.

You may know Marianne Williamson from smash hit spiritual books like A Return to Love, or her 2014 run for congress in California (4th place in the primary).

But she’s hoping you’ll soon know her as the Democratic presidential nominee, and the Abraham Lincoln who patched up what she sees as this country’s “emotional civil war.”

She formally announced her candidacy last week in Los Angeles.

Now there’s no doubt that an author in the office will be preferable to a TV game show host. And Williamson seems like she can do one better, promising in an interview with John Berman at CNN to take on our “amoral economic system” and to hack away at the “layers of systemic racism” in this country. (**Heads up: for more on the many slippery things universal health care can mean and, unfortunately, not mean, check this out).

For now, our job is to make sure that commitments to these policy objectives represent the minimum ante for being seriously considered as a Democratic candidate in 2020.