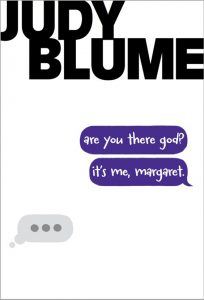 Why was the internet mad last week? A few totally legit reasons! On the perhaps-less-reasonable end of the spectrum was the total outrage over an updated cover design of Judy Blume’s 1970 YA classic, Are You There God? It’s Me, Margaret. The kerfuffle over the cover got so loud, the pearl-clutching became so intense, that Randee Dawn covered the story over at the website for NBC’s Today Show.

The cover in question is a 2014 update designed to look like Margaret is texting with God on an iPhone. ProPublica reporter Jessica Huseman tweeted a picture of the cover last week, commenting, “What have they done to Judy Blume this book was copyrighted in 1970.” This set off an avalanche of displeasure at the horrors of a new cover for a novel they likely haven’t read or rarely thought of in over twenty-five years. (Huseman later tweeted that her original post was “mostly a joke.”)

A tweeter named Gary Patrick Brown said, “Noooooooooooo. I bloody loved Judy Blume books in my early teens. I guess this cover may appeal to today’s youngsters but it just seems wrong.”  Huseman’s 185 other replies are littered with expressions of displeasure (“I am traumatized! How is this possible?”) but Twitter user @DrunkOperator might win for biggest overreaction with “Okay maybe burning books is okay sometimes.”

It’s interesting that this didn’t explode when the cover was changed four years ago. Blume is totally on board with the new design, according to a 2017 Vox interview with Justin Chandra, publisher of Atheneum Books for Young Readers, and cover illustrator Debbie Ohi. Chandra says that Blume was “very specific about one thing: These should be books that kids today would pick up. She was not looking for nostalgia, but rather books that middle grade kids today would be drawn to.”

Only the most special of special books continue to resonate with new generations of readers for fifty years. The pain and awkwardness that come with being a teenage girl transcend decades, so it’s not really a surprise that Are You There God? It’s Me, Margaret is still beloved today. But in order for this (or any) book to grab the attention of today’s generation, it has to compete with YouTube videos and Instagram stories. The goal here is to keep Blume’s book alive and thriving until basically the end of time (sooo, like four more years?) — why are we freaking out over how we get it there, especially when it’s in a totally legit way that’s hurting nobody? Why would a modern tween want to read something that looks outdated and in no way relevant to their lives?

Suspiciously, it feels as if the outrage over the cover is wrapped up in the stereotype that kids today are always on their phones, an accusation that is often wrapped up in sexist rhetoric frequently targeted at young women. But it’s 2018. Your grandmother texts. Get over it.

And if you are so “shook”—as they kids say—by the new cover image, go ahead and buy one of the old ones. There are still plenty available.