Are you there, Margaret? It’s me, Hollywood

Back in August, author Judy Blume got us excited when she asked the internet what books of hers we would like to see turned into a movie or TV show. (The correct answer: all of them.) 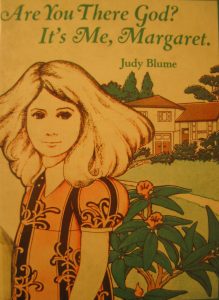 After many years of opposing her books being turned into movies, Blume tweeted out “I think the time has come,” and casually mentioned that she was taking meetings in Los Angeles. Now comes news, via an exclusive at Deadline Hollywood reported by Mike Fleming Jr, that Blume’s seminal YA novel Are You There, God? It’s Me, Margaret will be adapted into a movie, written and directed by Kelly Fremon Craig and produced by James L. Brooks.

Blume’s beloved novel tells the story of a twelve-year-old girl as she reaches puberty; it masterfully captures all the tortured and confused feelings that invade our developing bodies during that time. Published in 1970, Are You There, God? It’s Me, Margaret has withstood the test of time (no matter what the cover looks like) and is still turned to by tweens and teenagers to help answer the questions they haven’t yet figured out how to articulate.

Fremon Craig’s directorial debut was The Edge of Seventeen, also a story focused on a teenage girl. She seems more than capable to handle Blume’s story, given her resume; she also is an ardent fan of the book, who seems to understand exactly how important this story is to so many people. She told Deadline:

“It is this right of passage for women and girls. It’s rare for me to run into a woman or girl who hasn’t read it and every time I’ve mentioned it to a woman, they clutch their heart and let out this joyful gasp. There’s something so timely and full of truth and I remember for me that at that age, it felt like a life raft at a time when you’re lost and searching and unsure. This book comes along and tells you you’re not alone. Women remember where they were when they read it. I can’t think of another book you can say that about.”

For now, the film is still in the very earliest stages – Fremon Craig is currently writing the script and thinking about casting roles. She said, “What I’m going to need is a great 12-year-old actress to play Margaret.”  May we offer a few suggestions?

Two For Tuesday: What time is it? BEA time!