Are you there, America? It’s us, Melville House. 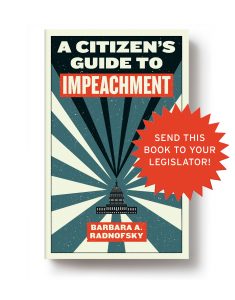 Friends! Compatriots! People so partial to the world that they would rather not see it destroyed!

Hello. This is just a reminder that the situation in Washington remains incredibly serious.

Our campaign to send a copy of Barbara A. Radnofsky’s A Citizen’s Guide to Impeachment to every member of the House and Senate is coming right along. So far, we’ve received hundreds of donations. And we have hundreds left to go.

Barbara, in the meantime, has been busy — last week, she published op-eds in both the La Times (“Misleading the public or lying in a way that causes harm to society—an allegation in the first Article of Impeachment against Nixon—is impeachable”) and the Washington Post (“The Founding Fathers tried to prepare the country for the possibility of someone not only corrupt and venal—whereby impeachment was ‘an essential check… upon the encroachments of the executive,’ as Alexander Hamilton put it in the ‘Federalist Papers’—but also from someone simply unable to perform the job, whether through incompetence, ignorance or incapacity”). This past weekend, the Houston Chronicle got in on the act, too, running an excerpt from the book (“While it’s important to understand that harm to society is the significant element emerging in the history of U.S. impeachment cases, it’s equally important to know what the Founding Fathers’ intentions were as they debated, crafted, and finalized the Constitution’s impeachment clause”). Basically, it’s kind of a big deal.

You can read our press release about the initiative here. To see who’s already had a copy bought for them, and join in, click here.