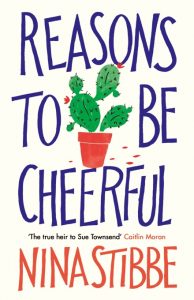 The Bollinger Everyman Wodehouse Prize hasn’t had the best form since its inauguration in 2000. The only big award in the UK to celebrate comic literature, it has shamefully just three times been won by women, and last year it declared all books to be so unfunny no winner was selected.

No such problems in 2019 as a woman has won: Nina Stibbe for Reasons to be Cheerful, published by Viking, making her the fourth woman to win in nineteen years.

Stibbe is best-known for her book Love, Nina, which was adapted by Nick Hornby into a BBC series and won the Non-Fiction Book of the Year at the 2014 National Book Awards. Reasons to be Cheerful is about eighteen-year-old Lizzie Vogel’s journey to adulthood as she “leaves her alcoholic, novel-writing mother and heads for Leicester to work for a racist, barely competent dentist obsessed with joining the freemasons” according to its blurb.

Stibbe beat four fellow shortlisted authors to take home the prize: Roddy Doyle’s Charlie Savage (Vintage), Lissa Evans’ Old Baggage (Doubleday), Jen Beagin’s Vacuum in the Dark (Oneworld) and Paul Ewen’s Plug: Writer in Residence (Galley Beggar Press). And as there was no winner last year, she received a bumper prize of a methuselah of Bollinger Special Cuvée, a complete set of the Everyman’s Library collection of P.G. Wodehouse books, and, unusually, two rare breed pigs named after her book. Stibbe said on her win, as reported by Mark Chandler at The Bookseller:

“I have always wanted a pig—my own Empress of Blandings—and now I shall have two … I’m overjoyed to have been awarded the Bollinger Everyman Wodehouse prize. To win against such talented competition, to be honoured with the pigs and to go home with a family-sized bottle of Bolly, and the complete works of Wodehouse is a dream come true for any writer.”

The Comedy Women in Print Prize (CWIP) has also announced its longlist, the shortlist to be chosen later this month and the winner to be announced on 10thJuly. We wrote last September of the prize’s birth, set up to celebrate the achievements of women and support the next generation of witty female writers, and here is its first selection, as chosen by judges Marian Keyes, Allison Pearson and Jennifer Young:

The CWIP wrote on announcement:

The twelve books on the longlist are all linked by their humour, but are also very different, which demonstrates the sheer volume and diversity of witty writing that is out there. As Lederer says, “one person’s joke is another person’s groan” and CWIP recognises the challenge and pleasure in providing a platform for such important and witty reading.

So hurray for women, especially those flying the funny flag. But, at the risk of taking the shine off and banging a drum I so often carry around with me, where are the small, independent publishers represented on these prize lists? Those hardworking publishers with tiny, dedicated staff, limited budgets but tons of enthusiasm and the ability to risk-take? Not one graces the The CWIP longlist and The Bollinger Everyman Wodehouse Prizes shortlist saw only one, true small indie among its five. Maybe next year women and small indies can prosper…?

I used to hate facial hair. But then it grew on me: new book of Dad jokes, coming soon.