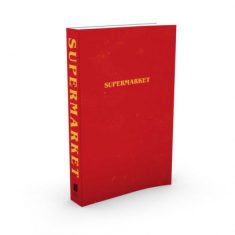 On a recent episode of The Daily Show with Trevor Noah, platinum-achieving, grammy nominated rapper Bobby Hall, aka Logic, was brought on air to discuss his new album novel.

Yes, that is correct. Simon & Schuster has just published the 29-year-old’s debut, Supermarket, which is now number one on Amazon. When Noah asked Hall how he goes from rapper to novelist, Hall had this most righteous advice: “You just read a bunch of books and be like, ‘I can do that.'”

Can you feel the Logic?

As music business reporter Amy X. Wang, writing for Rolling Stone, points out, Supermarket, released this past Tuesday, was “paired with a 13-song soundtrack.” Hey, dope, cool. Well, I guess that’s better than those dad mixes people make for their books that include a hell of a lot of another notable musician turned writer and now Nobel Laureate for literature Bob Dylan.

Woah, wait. Guys. Guys! Is Hall like on his way to becoming a future Nobel Prize-winning Laureate? If Bob could do it, can Bobby pull it off too?

I mean, who’s to say when Ready Player One writer Ernst Cline gives you this kind of killer blurb: “[Supermarket] is like Naked Lunch meets One Flew Over the Cuckoo’s Nest—if they met at Fight Club.”

I mean who wouldn’t to let the days go by reading a book that begins like this:

So this is how it feels to take a man’s life. Forced to kill for one’s own survival.
I looked down at the puddle of blood by my feet, locking eyes with my own reflection. Fluorescent lights flickered overhead. How did I get here? I was just a dude who worked at a grocery store.

Apparently, to the many commenters on Amazon, they do. Wang listed a bunch already, but people keep adding them. Some latest gems:

Bobby really does a great job at painting a picture.

Best book with the best soundtrack ever.

A most literary Grammy Awards show... kind of