Anne With an Eeeeeven Canadian adaptations are politicized now?! Absolutely anything in the world can be partisan. All of the things, all the time, forever. Case in point: the CBC’s “Anne With an E,” the latest TV adaptation of L.M. Montgomery’s classic Anne of Green Gables.

If you are between the ages of twenty-seven and forty-four, you are legally required to love Kevin Sullivan’s 1985 CBC adaptation, featuring Megan Follows as the red-headed, strong-willed orphan Anne Shirley, who stole the hearts of her accidental adopters, brother and sister Matthew and Marilla Cuthbert. For thirty years, Follows has been the Anne Shirley, and Richard Farnsworth and Colleen Dewhurst the most Cuthberty of Cuthberts. That adaptation is iconic, classic, understated… just damn near perfect. To the point where, two years ago, nearly all my female peers posted their devastation to social media upon the news that Jonathan Crombie, the actor who played Anne’s frenemy-turned-love-interest Gilbert Blythe, had died at the age of forty-eught. (Fun fact: Crombie beat out Jason Priestley for the role of Gil.)

So of course the reboot would elicit strong reactions from the media, with most reviewers having grown up familiar, if not emotionally intimate, with Sullivan’s adaptation. But what’s so fascinating is how these reviews are split along party lines.

“Anne With an E,” which aired last year on the CBC under the title “Anne” and is available outside its native Canada via Netflix as “Anne with an E,” has billed itself as a darker, grittier adaptation, focusing on the bullying Anne endures (both in the Nova Scotian orphanage where we first meet her and in her new hometown on Prince Edward Island), her depression living with other families (who regard her mostly as a servant) before moving in with the Cuthberts, and her isolation and loneliness as an educated outcast in the orphanage.

The New York Times’ Neil Genzlinger called it “richer” in a review last week, and even labeled Anne “subversive” in comparison with other teenagers on film and television. Now stack that up against the Federalist’s Lauren Hanson, who demurely claims in her headline that the new adaptation “sucks the soul out of” the original text. Montgomery’s story, Hanson writes, is ruined by the modern impulse toward realism and hardship. She makes it a point to inform us that the producer, Moira Walley-Beckett, also produced “Breaking Bad” (like that’s a bad thing?). And while Hanson’s main complaint is that Anne’s “indomitable spirit” is lost in this adaptation, what she’s really saying is that this Anne is too wimpy, too easily hurt by kids just being kids, “ready to crumble at the slightest provocation.” 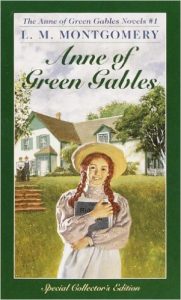 How can two reviews be so glaringly different, and how can a character be subversive to one viewer, snowflake to the next? Let’s blame the climate. Because if you keep trawling these reviews, they are split almost perfectly along political-culture lines.

From IndieWire’s Hanh Nguyen stating that “Anne With an E” “dares to get bold and messy” and “might push the messaging too far” but “rarely feels insincere” to the LA Times’ Lorraine Ali calling this Anne “whip-smart” and “scrappy” with a “redemptive dose of humility” to Variety’s Sonia Saraiya half-heartedly praising the show as “emo” and “mostly successful,” liberal and politically unopinionated publications are generally on board with the new Anne.

But writers at conservative publications have been more lukewarm. The New York Post’s Hana R. Alberts wrote a piece in which she doesn’t exactly review the show, but does find it necessary to tell us that the young star, Amybeth McNulty, participated in the Toronto Women’s March, and includes the great line, “Even feminism crops up” — as though Anne Shirley were not an inherently feminist character. Writing in the Catholic magazine America, Haley Stewart observes that the adaptation has stripped away the “innocence and joy” of the book, reminding us by its grit that “now more than ever we need unrealistic, ridiculous Anne Shirley, with all her whimsy and infectious joy.”

But it’s not all by party line. Slate’s Marissa Martinelli, hardly a Heritage Foundation surrogate, gets in on the game, too. The pull quote from her review is this ridiculous line: “It feels at any moment as though McNulty might plop a pink pussyhat over her iconic braids and wink at the camera.”

Still, on balance it seems that if you’re wondering whether you’ll like “Anne With an E,” you don’t really need to worry about reading a review — just check your voting record, snowflakes!