André Schiffrin was director of publishing at Pantheon and is the founder of The New Press.

In The Nation this week, esteemed publishing veteran (and Melville House author) André Schiffrin weighs in on the Random-Penguin merger and offers some cautionary wisdom to anyone who thinks this latest consolidation is business as usual.

The problem — as Schiffrin knows well from his experience leaving Pantheon when Random House made it clear that the bottom line mattered most — is that the companies who own the now-merged and formerly-independent publishing houses aren’t happy with the 3% profit margin each year that is typical in book publishing.

Let us then assume that [the] optimistic projections are correct: fewer titles and editors, more efficient distribution and a better deal with Amazon, at least for the larger and stronger firms. Will this suffice to please the stockholders?

Even taking measures like cutting out the midlist and more literary books won’t help to increase the profit margins, especially in this climate:

Bertelsmann apparently hopes its new merger will raise the hitherto disappointing profits it has realized from the 10,000 titles Random House publishes annually through its 200 “imprints” (once flourishing independent houses). But what these maneuvers suggest is that trade books simply aren’t profitable enough, and never will be for their corporate owners, and that the houses that publish them probably should not have been bought in the first place. 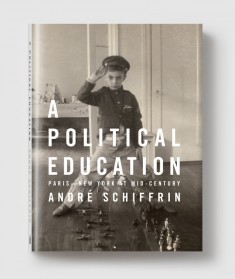 Schiffrin then paints a bleak picture for the future, one in which most bookstores like the Eighth Street Bookshop that he worked in as a boy, eventually disappear.

It’s the same argument he outlines in The Business of Books: How the International Conglomerates Took Over Publishing and Changed the Way We Read — a depressing dose of reality, but one that has inspired the founding of small presses like Two Dollar Radio.

André Schiffrin’s excellent memoir, A Political Education, offers more about his life and career as a publisher and is available from Melville House.