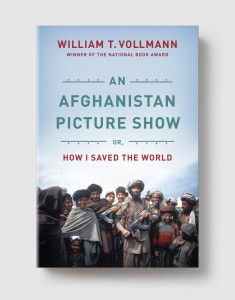 In 1982, the young William T. Vollmann worked odd jobs, including as a secretary at an insurance company, until he’d saved up enough money to go to Afghanistan, where he wanted to join the Mujahideen to fight the Soviets. The resulting book wasn’t published until 1992, and Library Journal rated it: “The wrong book written at the wrong time . . . With the situation in Afghanistan rapidly heading toward resolution . . . libraries may safely skip this.”

The result? Alone among Vollmann’s books, it has never been reprinted in paperback and has been all but invisible for twenty years. (Today, the Congressional Research Services estimates that what Alexander Cockburn recently called the “lost-cause war” cost the US more than $400 billion between 2001-2011 — and we’re not finished yet. Whose naïve now?)

Thirty years after Vollmann first set off to join the mujahedeen and to repel the Soviet invaders, it’s time for a reassessment. An Afghanistan Picture Show (7/30) is not a work of conventional reportage; it is not the failed white paper that some reviewers took it to be; it’s not even a linear narrative. Instead, it is a fragmentary work of memory and of buffeted subjectivity, an intimate account of humbling failure, and an account of a subtle and stubborn consciousness grappling with the limits of will and idealism imposed by violence and chaos and a book that will appeal to readers of both George Orwell‘s An Homage to Catalonia and Jon Krakauer‘s Into The Wild.

Last fall, Craig Walzer and Chris Bloomfield, who founded Atlantis Books in Greece, visited Vollmann at his office in Sacramento, California to discuss An Afghanistan Picture Show. You can watch that interview by clicking the link below. Click here for a longer version of the same interview.