An interview with Lore Segal, author of Half the Kingdom 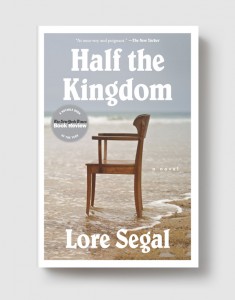 In Half the Kingdom, the renowned New Yorker writer and Pulitzer Prize finalist Lore Segal creates a hilarious, poignant, and profoundly moving portrait of life today—where terrorist paranoia and end-of-the-world hysteria mask deeper fears of mortality; where parents and their grown children vacillate between frustration and tenderness; and where the broken medical system leads one character to quip, “Kafka wrote slice-of-life fiction.”

At Cedars of Lebanon hospital the doctors have noticed a marked uptick in Alzheimer’s patients. People who seemed perfectly lucid just a day earlier suddenly show signs of advanced dementia. Is it just normal aging or an epidemic? Is it a coincidence or a secret terrorist plot? With buoyant black humor, Segal masterfully interweaves her characters’ disparate lives—lives that will, for good or for ill, all converge in Cedars’ ER.

Funny, tragic, and tender—with a deep humanity and a great appreciation for the absurd—Segal’s writing always surprises, making Half the Kingdom both a brilliant portrait of life in America today, and a joy to read.

We spoke to Segal about Half the Kingdom, humor, and aging in her Upper West Side home.

How can a book about death and dementia be funny?

In one of the stories within the novel, there is an elderly couple—they are old lovers—that meets for lunch… Their children are about to pick them up again and the woman goes into the bathroom, and she sees her hair is falling down, and she sees herself—the old face, with the gray hair falling like a young girl’s—and she thinks, this is what Diane Arbus would have seen.

She means that Diane Arbus would see in us exactly what we hope nobody would notice, exactly what, when we walk into a room, we kind of hope people won’t see, this thing we don’t want to know about ourselves, and here it is: clear as anything. And she is appalled. Now, this is the point: what she sees is appalling, but… she was excited by this appallingness. And she thought, “Oh, next time I’ll tell Jack about it.” This is the way in which horror can become interesting and, in some odd way, enjoyable, because it’s so fascinating.

There are many things like that. There is one character with whom I identify to some extent—her name is Jenny, she is the main character’s wife, and she keeps finding that the world is interesting and charming. She is charmed, for instance, by the notion of the doggy bag, a wonderful American invention. She is delighted by the notion that the local builders have made square holes facing around the building sites so people can see [in]. So her daughter has the view which I also have that the world’s going to the dogs—but she keeps saying, yes, but the doggy bag, and the builders who make holes. It’s that double vision of a rotten world which is so frequently charming and interesting and amusing. It’s impossible to be totally gloomy about the worst things that happen to us, because they’re interesting.

Half the Kingdom is an exceptionally funny book. How do you approach writing humor? Do you have to work to keep it simultaneously joyful and dark or is the tone something that emerges more naturally for you?

It emerges inevitably. I don’t do anything about it. For instance, one of the most appalling experiences is if you are [a] caregiver [and] have to deal with the Social Security offices. If you see it the way Kafka sees it, you have the Kafka view—we are told that Kafka roared with laughter over what he wrote. Nobody else might have noticed it, but I think it’s that kind of laughter we are talking about.

Have the places that you find humor changed as you’ve gotten older?

I think my life has always been a matter of looking around when something awful happens, something sad happens, or something disturbing happens, and I think, aha! There’s a story. So the events, the experiences, are always on the cusp of being somehow useful. It isn’t exactly humorous, but it takes it away from gloom, from the pure downturn—because things turn into copy.

Half The Kingdom’s epigraph, “And if they have not died, they are living to this hour,” comes from Grimm’s Fairy Tales. What draws you to those stories?

There’s something about Grimms’ Fairy Tales which is also this mix of the upturn and the downturn. The prince and the princess get married at some elaborate wedding and they inherit half the kingdom, and if they have not died, they are living to this hour. I mean, for one thing, it’s—what do you call it? Is that a tautology? I mean, what is it? Where you say something and then you say something else and it means the same thing. You feel as if you’ve just said some wisdom but in fact you’ve merely stated the obvious! So that amuses me.

It’s certainly fitting for a book about the elderly.

Yes. After all, that’s what we old people experience. Since we haven’t died we are still here! If we had died we wouldn’t be here! And after we die we won’t be here! We are on the cusp. And I’m laughing, you see. It is funny.

Fairy tales are, of course, typically associated with children, and yet you make the connection between this fairy tale and the elderly.

You know, they weren’t originally children’s stories. For instance, in Grimm’s Fairy Tales there’s a little section in the end called the Kindergeschichte—the children’s stories—and they’re mostly about what happens to bad, naughty children and how they can be made into good children. But the stories themselves were medieval television. That’s what people did in a world where you had no light, you had no television; you went to bed and then somebody told stories. They’re the newspaper and the television—they tell you what’s happening….

The fairy tales seem to spook my head—I mean, they walk around in my head—so I do think about it. They affect my thinking quite a bit. I’m interested in Ida [a character in Half The Kingdom] as the witch… Presumably people who feel a grudge against the world, and maybe a grudge that they deserve. I’m not using fairy tale, I’m eschewing fairy tale.

In an interview that you did a few years ago about Shakespeare’s Kitchen with BOMB, you said, “Being an elderly person, I want to write about the loss or partial loss of memory, so I’ve got myself a character who remembers nothing—an amnesiac.” Is Half the Kingdom the culmination of your interest in memory loss?

Incidentally, one of the things that I’m going to find as I talk to you and as I will be talking: my facility with language is quite slower; [words are] much less available to me than [they were] ten years ago, twenty years ago. And that’s part of the experience, and that’s part of the conversation. When I went to speak in Austria some ten or twenty years ago I had the experience of speaking in German when my vocabulary was missing. I had the vocabulary of a ten-year-old. And now I have the same experience as an old person; my vocabulary is not necessarily available to me. And I think most people in my generation are now experiencing that. It’s sad. I miss it. I regret it.

How does it affect the actual process of writing?

It doesn’t affect writing very much, because I can put a holder. I can put three question marks—that means go back there and find the word. The other day I wanted to say “Charles Dickens” and he wasn’t available—but he came back a little bit later.

But in the course of conversation, I am now aware and even a little bit worried as I start a sentence; I wonder whether I’ll get to the end of it. [All I can do about this affliction] is say, maybe boringly: isn’t that interesting, what happens to language? That’s my defense.

On a somewhat related note, you’re a connoisseur of the exclamation point, which so many writers shy away from.

Oh, I’m always guilty. Every exclamation mark is a shameful thing. Yes, you’ve got me.

What’s your relationship with the exclamation point?

Well, you’re told not to use it. You make your exclamations within the sentence; you don’t have to [punctuate them].

You often write about close-knit tgroups of intellectuals and Half the Kingdom is no different. What interests you in these groups?

When [my family] came to the new country [we had] to create the new family made out of friends. That’s a very common theme now; many people are interested in friendships. But I was interested in the slow acquisition of intimacy, and its troublesome existence, and how it falls apart.

Much of Half the Kingdom takes place in a hospital. Did you conduct research for those scenes?

When you have a mother who gets to a hundred and one years old, you spend a lot of time in the emergency room. It’s one of those things when you go to the emergency room and you go home and a week later you’re back. That was my experience. Morning, noon, and night. And it’s a fascinating place, and it’s a place in another world—you know that. If you walk into a hospital, you’ve left the world behind you. You’re in a different place. That’s one of the things I wanted to investigate and recreate.

In some ways, the world inside the hospital is a heightened version of the world–or at least of the tragedy and absurdity of it.

You know, I think it worries people—it shouldn’t anymore… The laughter and the tragedy makes people very uncomfortable. My students didn’t like stories that asked them to do both at the same time. So am I supposed to feel sad, or am I supposed to laugh at this? And I can’t help it, because that’s what the world does.

An interview with Half The Kingdom author Lore Segal