Full disclosure: This interview did not go as planned. I envisioned it as a cordial, informative conversation with one of the Christopher Bouchers who appear in the new mockmuster novel Big Giant Floating Head, by Christopher Boucher (To be clear, I also appear in the book, as a professor-turned-journalist Boucher.), but it quickly devolved into something else. In the end, though, I hope the Bouchers’ passion—misguided though it may be—might give you some sense for the book itself.

I met Boucher at the Denouement, a watering hole in Coolidge, Mass. The place was full of Bouchers, but the one I was waiting for—Boucher as gutter-installer, the one who begins the book—was forty-five minutes late; I was just about to leave when he huffed in, punched me on the shoulder, and sat down beside me. I don’t mind admitting that I was irked. I was doing Boucher a favor, after all. He might just as well have been interviewing me!

The interview that follows has not been edited; it’s a straight transcript of our conversation.

BOUCHER: What time is it now?

CHRISTOPHER: Why? I thought you’d jump at the chance to talk about the book and your role in it.

BOUCHER: So you invite me to a Boucherbar?

BOUCHER: That’s not something I want to be reminded of. Look at those sorries back there.

CHRISTOPHER: Shh! Are you trying to get your ass kicked?

BOUCHER: By who? These whip-poor-wills?

CHRISTOPHER: I didn’t come here to argue. I just thought we could try to give the readers a sense for the book. Which, personally, I think is a bit difficult to describe.

BOUCHER: And you thought I could help you with that? To me it’s—sheesh. I mean, you could tell them it’s about a guy whose life is falling apart. About a failure—a professional loser.

BOUCHER: I don’t think so. What doesn’t Boucher lose in this book? He loses girlfriends, wives, jobs. (Points to Christopher’s head.) Hair! Dignity. Even words themselves!

CHRISTOPHER: Could we call it a book about heartbreak? Think about our scenes with Liz, for example. And the chapter where everything divorces us.

BOUCHER: You know who you want to talk to about this? (Looks into the back room of the Denouement and sees a Boucher playing the game “Roaches!”) Chris! Hey Chris!

A new Boucher – Boucher from the “Bodywall” chapter – turns away from the video game and walks towards the bar. This Boucher, Chris, has a brick wall running down the center of his body and he’s held together by bungee cords.

BOUCHER: Hey man. (They do a complicated literary handshake.) This is Christopher.

CHRISTOPHER: For The Daily Whale.

BOUCHER: I thought you might have the words to describe it.

CHRISTOPHER: Would you say that heartbreak is a central theme in the book?

CHRIS: Maybe. But heartache that takes really strange shapes. There was that time we couldn’t hold onto anything. And then our friendship with the Suicide.

BOUCHER: I don’t think heartbreak totally captures it either.

CHRIS: And the man who died because of Boucher.

BOUCHER: At its core, though, don’t you think the book’s about Boucher’s heart itself—

CHRISTOPHER: And don’t forget the Unloveables.

BOUCHER: Listen. Will you guys listen to me?

BOUCHER: Listen! You want to know what the book’s really about? (Reaches into his shirt, pulls out his heart, and slams it on the table.)

CHRISTOPHER: What are you—what’s—oh God.

Chris and Christopher stare at the heart.

CHRIS: What is that thing?

CHRISTOPHER: It has eyes.

CHRISTOPHER: No. Is it? It looks more like a potato to me.

Then a fourth Boucher—obese, completely bald, with a tattoo of a book on his neck—storms over.

BOUCHER: You hear how strangely it beats? How it sort of only half works?

BOUNCER-BOUCHER: Sir? Either put your heart away or I’m going to have to ask you to leave.

CHRISTOPHER: Guys, please. Let’s all just calm down. I have more questions! I want to know what Liz thinks about the novel, and what you think a novel in 2019 is for.

BOUCHER: If you listen to it, you’ll hear the whole book. (Picking up the troutpotatoheart.) Trust me! Just—

BOUCHER: —put your ear to the heart and listen!

Bouncer-Boucher tackles Boucher and wrestles him to the ground. As Boucher tries to kick away, Christopher catches a foot to the mouth. Chris slinks off, and Boucher’s heart is knocked to the floor and crushed underfoot. Bouncer-Boucher pulls Boucher out of the bar as the Bouchers in the back room jeer at him.

BOUCHER: I fucking hate you. I hate you all! I don’t ever want to see any of you ever again! 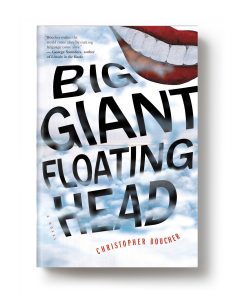 Christopher Boucher is a professor of English at Boston College and the editor of Post Road magazine. He is the author of the novels Big Giant Floating Head, How to Keep Your Volkswagen Alive, and Golden Delicious, and the editor of Jonathan Lethem’s More Alive and Less Lonely, all from Melville House.

To Catch a Beat: Jonathan Lethem watches Herbert Huncke in a bookstore