An indie bookstore in Brisbane breaks out the MRA repellant 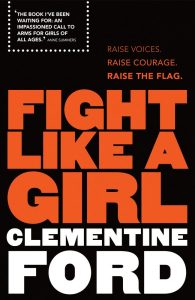 In an endearing (read: pitiable) swell of testosterone-fuelled solidarity against the evil F-word (“fffeminism”), the alphas and betas of the MRA world (that’s Men’s Rights Activists, if you’re lucky enough not to know) crawled out of the woodwork on Monday to descend upon an independent bookstore in Brisbane, Australia for supporting—cue gasps—a feminist writer.

As Stephanie Convery reports for the Guardian, when the Avid Reader Bookshop shared a Facebook post from Australian writer Clementine Ford announcing Boys Will Be Boys, her forthcoming book about toxic masculinity, a full-fledged assault against the shop’s Facebook page ratings ensued. The goal? To throttle the store’s social media statistics — while expressing outrage at those stinky, man-hating feminists.  “One star because feminism is garbage,” proudly proclaims one Elias Williams, who seems never to have actually visited Avid Reader, but feels the need to declaim his disapproval of “sexually frustrated gender warriors” before he can go on with his day.

Neither Ford nor store owner Chris Currie is a stranger to such online harassment and aggression. Currie tells Convery that Ford’s first book, Fight Like a Girl, garnered similar outrage when it was published, and Avid Reader’s event to celebrate its release summoned some of those same “‘men’s rights’ swamp monsters.” And Ford didn’t take it lying down when she was suspended from Facebook for thirty days last year after telling another user—who had called her a “diseased whore”—to “fuck off.”

Of course, all’s well that ends well. A counter-response was promptly put together by two former Avid Reader employees: the brother-and-sister duo of Benjamin and Michelle Law. Devoted customers and strangers alike banded together on the front lines, honorably wielding five-star reviews and words of praise. Some expressed regrets that they couldn’t support the store physically and offered their cyber-support instead, while others promised to spend their birthday money on mail order books.

The 347 one-star reviews were swiftly buried by 5,100 five-star reviews, thus drawing to a close the Anti-Feminist Battle of the Week.