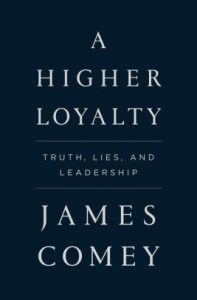 Head to Amazon and you might assume James Comey’s A Higher Loyalty is totally worth the hype. 4.9 stars outta 5?! When do you see that!? But there might be more behind those numbers.

According to Andrew Liptak at The Verge, Amazon is refusing to post reviews from customers who did not purchase Comey’s memoir directly from the online mega-retailer. This “exclusionary rule” apparently applies to both the print and electronic editions.

Citing earlier coverage by Bruce Haring at Deadline, Liptak notes Amazon’s apparently deleted some low-rated reviews as well. Some one-star reviews of the audiobook have also been removed at Audible, which Amazon owns.

Liptak notes that this particular protocol isn’t necessarily new or malicious. Amazon also deleted many one-star reviews of Hillary Clinton’s memoir What Happened and Michael Wolff’s Fire & Fury. According to Amazon’s Community Guidelines, the company “will restrict non-Amazon Verified Purchase reviews for products when the company detects ‘unusually high numbers of reviews for a product posted in a short period of time.’”

So, what’s A Higher Loyalty’s rating on GoodReads? 4.34 stars.