Amazon and Russia and adult coloring books, oh my! So here’s a weird one. As Danuta Kean reports for the Guardian, academic Timothy Snyder, who wrote the post-Trump smash On Tyranny, and The Bodley Head, his UK publisher (and an imprint of Vintage UK), have blamed Russians for the appearance on Amazon’s UK site of an apparently fictive adult coloring book also called On Tyranny, by an apparently fictive author named Timothy Strauss. (The name seems to be a mash-up of Snyder’s and that of Leo Strauss, the mid-twentieth-century political philosopher who also wrote a book called On Tyranny.) The main piece of evidence for Russian involvement seems to be that the words “Make World Great Again” appear in the book’s Amazon description.

Snyder is hugely respected as a scholar of Central and Eastern European history and the Holocaust. He teaches at Yale and sits on the Council on Foreign Relations. He is certainly on the Russian administration’s radar: in 2010, he says, the country’s Foreign Ministry declared his book Bloodlands—which had been showered in awards, including the Hannah Arendt Prize—a per se “human rights violation.”

Still, the case here hasn’t really been made, and while The Bodley Head is a venerable publishing house, they’re not particularly experts in cyber-security. As support for the assertion that “Make World Great Again” is a phrase that could only have come from Russia, Kean links to a Snopes page affirming the existence in Montenegro (which, to be clear, is an independent nation four countries away from Russia) of a single billboard that says both “Let’s Make the World Great Again — Together” and the phrase’s Russian equivalent (“Давайте вместе снова сделаем мир великим”). 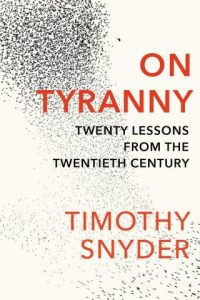 To me, for whatever it’s worth, both the phrase in question and the choice of weapon (an eponymous adult coloring book?) seem mildewily redolent of a thousand troll-filled basements, the kind that, alas, exist all over the world. For that matter, it’s not easy to seriously imagine why some of the most sophisticated spies on earth would try to suppress dissent against the American president by adding an imaginary coloring book to a UK website. But my point here is not really to argue with Kean, Snyder, or The Bodley Head—I don’t know them to be wrong—so much as to point out how the stock character of the “Russian hacker” continues to grow larger in the media’s imagination, happily defying facts and likelihoods.

Not too long after Kean’s story appeared, Claire Fallon published another piece, this one at the Huffington Post. In Fallon’s wording, the Guardian had reported “the book’s Amazon U.K. page was hacked, probably by Russian hackers.” In fact, the word “hack” does not appear in Dean’s piece (though it is tagged “hacking” on the Guardian’s site), and the report was not that Russians were “probably” to blame, but that the publisher “believed” them so.

In the Daily Kos, Walter Einenkel published a piece that distorts Kean’s story even further. Einenkel writes, “Images of Snyder’s On Tyranny were replaced on Amazon.co.uk with those for a non-existent colouring book.” But Kean never wrote that; she just said that an additional listing had appeared on Amazon for a fake adult coloring book with the same title as Snyder’s. The difference this elides, between a violation of Amazon’s standards and a breach of its security, is not small. Einenkel goes on to cite the same Snopes piece about the existence of a single billboard outside Russia as evidence of “posters that have appeared across” Russia. He repeats the word “hacks,” and even alters a quote from Snyder, changing a statement that “the attack basically confirms” the wisdom of his book to one crediting “the hack” with doing so. He ends by calling the whole affair “an interesting and strange occurrence from a country that has a long and storied history of avant-garde propaganda.” Listen, I get that Russia—more formally, the Russian Federation—is hot right now. One need only flip on a TV, leaf through any American newspaper, or peer into the garish tubeway known as the internet to perceive a mighty borscht tsunami apparently raging toward our shores. The background noise to the Snyder debacle includes FX’s “The Americans,” currently enthralling us with the cloak-and-dagger story of two Soviet spies living under deepest cover as milquetoast DC suburbanites (and making history as TV’s first drama to principally star a vast collection of wigs), as well as more serious developments, like the massive anti-corruption protests surging through the streets of cities and towns across that country—the biggest since Vladimir Putin announced his constitutionally questionable third presidential term in 2012—and the ongoing investigation into the clusterfuck of Team Trump’s, shall we say, excessive entanglements with various no-goodniks from the echelons of Russia’s oligarchy.

But while “The Americans” is super-fun, the protest movement inspiring, and the Trump-Putin thread manifestly worth pulling, things may be getting out of hand. Not everything is Russia’s fault. And Russian elites are hardly the only people with contempt for American institutions, or geopolitical bones to pick. The capitalist interests that connect Russia’s government and corporations with America’s government and corporations operate in many other places, too, and hold inordinate domestic sway here, in the UK, and in Russia alike, along with most of the rest of the world.

To insist, as some continue to do, that Russia installed Trump as president and protects him still with a stream of surgical updates to Anglo-American mass consciousness is to pointedly ignore the many definingly American contradictions expressed perfectly in his election, and to play into long-standing Russophobic tendencies that America should, by now, have outgrown. Russia has some problems, for sure — and so do we. By distracting ourselves with a never-ending national game of Pin the Tail on the Cossack, we impoverish our future at best, and imperil it at worst. When Trump is inevitably impeached (and o!, that it may come soon), his place will likely be taken by Mike Pence, the remarkably lifelike butter sculpture who just yesterday cast a deciding vote against women’s healthcare, in what was nothing less than an act of diffuse murder. We are no strangers to tyranny, trolling, or, god help us, adult coloring books.

At any rate, while Amazon has no policy against publishers passing one book off as another, the company does prohibit the sale of non-existent books, and the phony On Tyranny was removed within a few hours. The Kremlin could not be reached for comment.