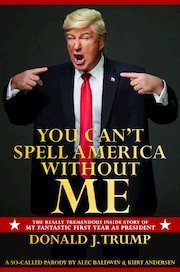 Entitled You Can’t Spell America Without Me: The Really Tremendous Inside Story of My Fantastic First Year as President Donald J. Trump, the collaborative book, which Andersen told Williams seeks to “channel and amplify” the real Trump, is, of course, a work of satire. Which is to say that Trump, who unfortunately cannot help but be the real Trump (with real-Trump repercussions), is, and always has been, a total joke. Kurt Andersen will write the book. Baldwin will narrate the audiobook and pose for the cover. Many people will laugh, we hope.

It was Andersen’s magazine Spy, which he founded in the eighties, that memorably razzed Trump as a “short-fingered vulgarian.” Meanwhile, Baldwin is best known these days for the cardboard-y, defiantly stupid Trump impersonation he brings to Saturday Night Live. So, the project, such as it is (Trump has proven again and again that, however offended, he is basically impervious to satire), is in capable hands, with each contributor doing what he does best. In an email interview with the Times, Baldwin described the working relationship like so: “[Kurt] doesn’t put on the wig, I don’t open up a Word document.”

The real question, though, is this: when the book hits shelves eight months from now, in a year that already feels like it’s been going on for a decade… will this all still be funny? Is there anything Anderson and Trump can come up with today that won’t inevitably be outshone by Trump himself tomorrow? That concern may be myopic, however. The realest question is: What will the Trump administration, already unprecedented in its disregard for a free press, say—or worse, do—in response such a publication eight months from now? Will we still be laughing then?