After the devastating Grenfell Tower fire in London, Philip Pullman names a Book of Dust character after a young victim Philip Pullman at a book signing. Via WikiMedia Commons.

On 14th June, London experienced one of the most destructive fires in its recent history. Grenfell Tower, a twenty-four-story residential block containing 120 flats, was completely gutted by flames that caused the deaths of at least seventy-nine people. Built in 1974 by the Kensington and Chelsea London Borough Council, the tower underwent a £8.7 million (about $11.3 million) refurbishment last year, but it didn’t adequately address safety regulations or concerns raised by residents.

The Guardian’s last Friday that a faulty fridge was the cause of the fire, which spread through the building with incredible speed, consuming it within half an hour. It has since been revealed that the tower containing exposed gas pipes — these were in the process of being boxed in, but at the time of the fire only a third had been dealt with. The tower’s cladding panels also did not meet fire requirements, prompting British Prime Minister Theresa May to call for  a “major national investigation” into the use of cladding on high-rise towers. The BBC has reported that since the fire, tests have shown that cladding from ninety-five towers in thirty-two of England’s local authority areas have failed fire safety tests, and, shockingly, that the “London Fire Brigade warned all 33 [London] councils about about the potential risks of external cladding on tower blocks in May this year.”

The publishing world has come together to help raise money for residents affected by the fire. Authors for Grenfell Tower’s online auction has been raising money for the British Red Cross London Fire Relief Fund, coordinated by authors Harriet Reuter Hapgood and Sara Barnard and literary agent Molly Ker Hawn. The auction closed on 27th June, with the 700 lots on offer raising more than £150,000 (nearly $200,000). Popular items included a literary lunch and editorial advice with agent Jonny Geller, CEO of Curtis Brown.

What extraordinary generosity in bids for #authorsforgrenfell.
Thanks to all who bid – £3100 will be quite a lunch! https://t.co/mGXjX8PoIr

Children’s author David Walliams offered an afternoon tea for four at Claridges in his company, where he would also give a book reading. He told Danuta Kean at the Guardian, “What happened at Grenfell Tower is so unbearably sad, I am sure everyone in the country was thinking how best to help those affected by this terrible tragedy…. If there can be some positive legacy from this, I hope it is to bring down the barriers between London’s rich and poor.”

And…cue tears. I am so proud to be a part of the publishing community. Thank you all for being so generous.

Philip Pullman offered the chance to name a character in his forthcoming book, lot 369 on the auction website:

This book will follow the first part of THE BOOK OF DUST, ‘La Belle Sauvage’, which will be published in October this year. The second part (not yet titled) will follow next year. The right to name a character doesn’t guarantee that he or she will be good, bad, beautiful or otherwise, but it will be a speaking role with a part to play in the plot. 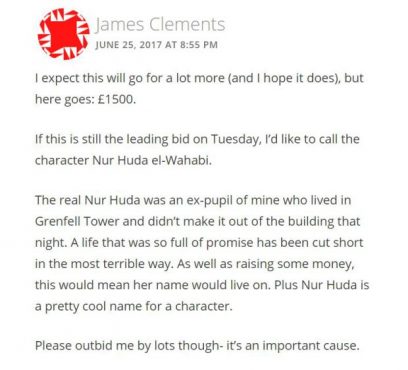 The Book of Dust lot was won by an incredible bid of £32,400 (about $42,000). Teacher James Clements originally bid £1,500 to name the character after sixteen-year-old Nur Huda el-Wahabi, one of his former students at Thomas Jones Primary School who perished in the blaze. His emotional plea consequently encouraged 448 people to contribute to his bid, securing the win and the memorialisation of el-Wahabi’s name.

Clements said that he has been touched by the response to his bid:

“The prize is amazing, so I didn’t expect for a moment that my bid would be anywhere near winning. It is incredibly life-affirming to know that there are so many good people in the world.”