After decades of adherence, Willa Cather’s estate violates her orders not to publish her letters Next month, Knopf will publish The Selected Letters of Willa Cather, a collection of correspondence from the notoriously private author of novels such as O Pioneers! and My Antonia, not to mention the novella Alexander’s Bridge, available from a certain top-notch publisher in Brooklyn. While it would be a great boon to scholars and fans to have access for Willa Cather’s letters to be made public, she had left adamant instructions to her executors that her private correspondence not be published or quoted.

As Jennifer Schuessler explains in the New York Times, “Cather was believed to have destroyed most of her letters and sternly ordered that her surviving correspondence never be published or quoted from, a wish her executors adhered to unbendingly, even as it fueled sometimes rancorous debate about her sexuality.” She goes on to point out that Cather wanted to be known for her work rather than her private life, as evidenced by her refusal to allow excerpts for anthologies or film adaptations, the latter following her disappointment with the 1934 adaptation of A Lost Lady. 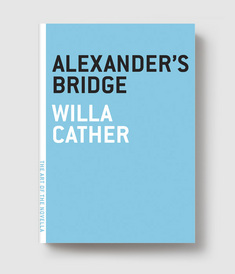 The editors of the new collection, Andrew Jewell and Janis Stout, acknowledge in the introduction that this publication flies in the face of Cather’s instructions, as set forth by a will that partially expired in 2011. Still, they believe that publication of her letters will prove invaluable for her legacy, arguing that “these lively, illuminating letters will do nothing to damage her reputation.”

They do, Schuessler says, “make clear that Cather’s primary emotional attachments were to women, while also laying to rest what the volume’s editors, in interviews, called a persistent urban legend: that of the fanatically secretive author eager to erase any record of shameful desire.” She also points out that Cather that she destroyed all her correspondence with Isabelle McClung, “widely acknowledged as the love of her life.” According to Stout, though, that act of destruction was not indicative of a deep-set determination to keep her lesbianism secret, but rather, the depression that she experienced late in life. Stout explains, “We knew she was depressed, but I didn’t know how depressed until I read those letters.”

Despite the author’s fairly emphatic insistence on privacy, this collection will likely be fascinating and informative—as long as you can live with the notion that, as Doug Barry puts it on Jezebel, “with every page you turn, you’re dancing a little more zestfully on Willa Cather’s grave.”