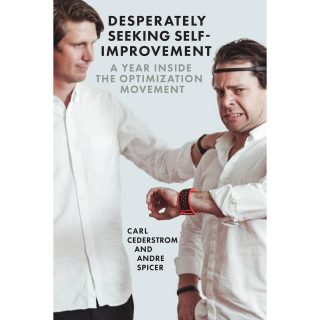 Go to any party today and it won’t take long for revelers to start chalking every lamentable injustice in their lives up to the inherent evils of capitalism (which, fair). And while most of us focus on its impact on our relationships within society at large, a couple of psychologists recently mapped out the long-term effects of the economic system on the individual, through the deceptively debilitating self-help fad of the last century.

For the Nordic edition of Business Insider, Karl-Johan Byttner reports on their research and how the self-help movement advanced from its beginnings as a direct response to the Great Depression to the hyper-individualistic fret-machine it is today.

In one year, Carl Cederström, an associate professor of organization studies at the University of Stockholm, and André Spicer, a professor at the Cass Business School of London, “read all famous self-help books”—from the one that started it all (Dale Carnegie’s How To Win Friends and Influence People) to Tim Ferriss’s 4-Hour [fill in blank]—only to conclude “that today’s self-help literature puts a sometimes unbearable pressure on the individual.” The result is their book Desperately Seeking Self-Improvement, published last summer by OR.

To Cederström and Spicer, the Western world’s obsession with individual success always reaches its peak when larger society and its implemented welfare reforms fail us:

“We’re living in a culture characterised by competition, where the idea is that we can manage through extra strong faith in ourselves. Society is being characterised by a kind of thinking where be believe that we become better people if we only get an education and get well-paid jobs, but often, it isn’t a matter of lack of motivation, but rather factors such as class and gender,” Cederström says.

It’s only natural, then, that someone like Donald Trump is now president. “The raw capitalism of the Reagan and Thatcher eras nurtured the ‘self-made’ ideals, and the current U.S. President, Donald Trump, is strongly influenced by Norman Vincent Peale’s The Power of Positive Thinking.”

In a profile published earlier this year in the New Yorker, Alexandra Schwartz puts it aptly:

“In a consumerist society, we are not meant to buy one pair of jeans and then be satisfied,” Cederström and Spicer write, and the same, they think, is true of self-improvement. We are being sold on the need to upgrade all parts of ourselves, all at once, including parts that we did not previously know needed upgrading.