About the size of that NEA budget 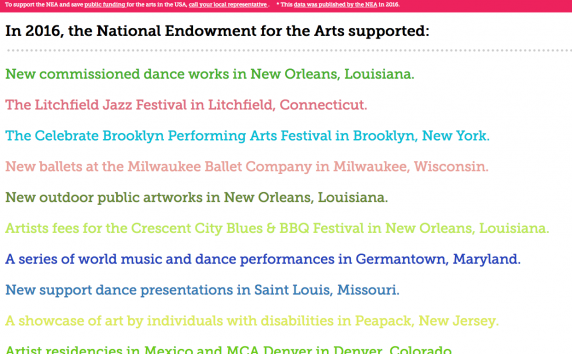 We wrote last week about what cuts to the NEA, NEH, and CPB would mean for arts in America, and the sheer ridiculousness of cutting programs that wring such high impact from comparatively miniscule budgets.

The money that gets alloted to these groups is a drop in the giant bucket that is the annual US budget.  Philip Bump broke it down at the Washington Post:

The Corporation for Public Broadcasting received $445 million in 2016. (It gets additional funding from donors like you.) NEA got $148 million. NEH requested the same. The Congressional Budget Office figures that about $3.9 trillion was spent by the government during the fiscal year.

If you were at Thanksgiving and demanded a slice of pecan pie proportionate to 2016 NEA spending relative to the federal budget, you’d end up with a piece of pie that would need to be sliced off with a finely-tuned laser. Put another way, if you make $50,000 a year, spending the equivalent of what the government spends on these three programs would be like spending less than $10.

Jillian Steinhauer at Hyperallergic also wrote about the NEA budget, and was inspired by a tweet from Ryan Chapman.

The est. security cost for Melania living 200mi away from Trump is double the annual budget for the National Endowment for the Arts.

So she decided to look at the numbers and gave us yet another way to consider the budget.

The current budget of the NEA is $148 million. The estimated cost for Melania and Barron comes from a CNN Money piece published not long after the election that cites three New York City officials who say the city is paying “more than $1 million a day” to protect Trump and his family. “Those costs won’t necessarily drop significantly once he moves to the White House,” the piece notes. “That’s because Melania Trump and their 10-year-old son Barron expect to stay at their home at Trump Tower in midtown Manhattan, at least until the end of the school year. And Donald Trump has indicated he plans to return home regularly, especially while they’re still here.”

If we’re generous and round down to $1 million a day, that means one year’s worth of security for the Trumps costs $365 million. That is, in fact, more than double the NEA budget — it’s a 146.6% increase.

Twice the NEA budget! To be clear, presidential families need and deserve protection. But it’s pretty rich to argue that taxpayers should foot the bill for two official residences, while giving up on our civic life. Here’s a quick roundup of some other recent budgetary items of interest that taxpayers will be paying for:

Thanks also to Steinhauer for pointing us to this hypnotic scroll of 2016 projects funded by the NEA, which is definitely worth a look.

This could be your weekend: OlaRonke Akinmowo's Free Black Women's Library is in Bushwick, check it out!