Excellent tidings for those persons of taste and refinement who’ve been breathlessly awaiting the final season of Broad City: Abbi Jacobson, who plays  Abbi on the show, has a book of essays forthcoming this fall with Grand Central (and, in the UK, Virago). I Might Regret This is scheduled for October 30th.

This is great news, for the obvious reason that Abbi is the coolest. (Ilana also is the coolest, of course, and the inspiration for Melville House’s storied internship program. (No.)) And it’s news made even more excellent by the fact that real-life Abbi, as followers of her real-life Instagram know, is a classic FAEROIT (Frequent And Enthusiastic Reader Of Interesting Things) — her recs have included, among others, Melville House UK dopeness-a-thon The Argonauts, the divisive-but-liked-by-its-editor A Little Life, Susan Sontag’s beyond-classic Against Interpretation, and Tenth of December by paragon of human niceness, universally beloved author, and What We Do Now contributor George Saunders. She supports bad-ass literary organizations like Girls Write Now. And she’s published a few books already—bestselling ones!—though these have been either illustration-focused, like 2016’s Carry This Book, or adult coloring books, of which she’s published two. 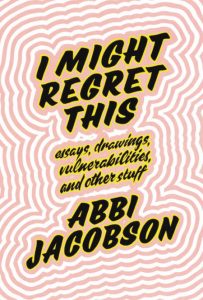 At The Bookseller, Katherine Cowdrey writes that the new one will feature Jacobson’s illustrations once again, this time accompanying “anedotes, observations and reflections.”

“This collection of essays terrifies me. I drove across the country last summer to find some silence, and I ended up saying more than I ever have. I was working constantly; my heart was broken and I felt like a chicken with its head cut off. This book is me getting it all down on paper, in an attempt to figure myself out more. So … yes, I might regret this.”

But let’s hope she doesn’t. With Broad City, which may just be the best thing on TV, preparing its Shinjo for one last ride in the dishwasher, it’s nice to know we won’t be hearing the last of her anytime soon.

No word on whether the book’ll be available at Bed, Bath, and Beyond.