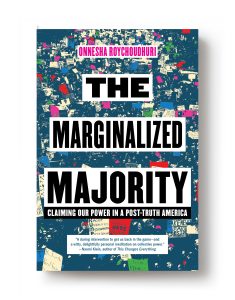 The Marginalized Majority by Onnesha Roychoudhuri

A recent article by Rachel Thompson on Mashable, the journalist discusses her rediscovery of reading with a year of reading only female writers. In response to the #MeToo movement and her realization that a significant majority of the books she read as a child were all penned by men, Thompson makes the conscious decision to address that imbalance by returning to her lost love of reading by perusing books by female-identifying authors.

In a very relatable and poignant quote, Thompson says:

The vast majority of books I read during my studies were penned by male authors, and more often than not, they told stories about male characters. I was hungry for a woman’s voice, for a story that resembled my own life, for pages that read like the inside of my mind.

Other people are taking on similar tasks, like Jalisa Whitley of Unbound Impact whose booklist this year contains works by only women of color “because we’re often not discussed in the ‘must read’ books lists.” Which, true, man. True. Her call for recommendations on Twitter led to huge response from the Internet, leaving with a list where “[she] could literally just read women of color for the next five years.”

What are your favorite books by women of color? Need some fire recommendations to round out my goal of reading 50 books only by women of color this year. Bonus pts for international writers #wellreadblackgirl

So, speaking of adding to the conversation of female authors, why not check our list of authors, too? Can we interest you in some Mary McLane, George Eliot, or Jane Austen? Or maybe some more contemporary works from Ladee Hubbard, Caitriona Lally, Onnesha Roychoudhuri, and S.K. Perry?