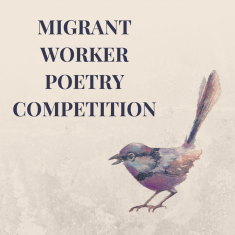 In a year that has seen many women winning awards for writing, another barrier was broken last week when a woman won Singapore’s Migrant Worker Poetry Competition for the first time.

Indonesian domestic worker Deni Apriyani won this year’s competition with her poem “Further Away,” inspired by a conversation she had with a woman trapped in an abusive marriage on a public bus. Apriyani told Olivia Ho at the Straits Times, “I don’t know who she is or where she is now, but she inspired me to write this.”

The woman, who warned Apriyani “to be careful in finding a husband,” inspired Apriyani to write such lines as “you stepped on my lungs” and “you took my twenty stars when I wanted to see.”

The competition is a way for migrant workers to step outside the responsibilities of their daily lives and express their artistic talents, while also banishing the stereotypes associated with their jobs. Zakir Hossain Khokan, a construction supervisor who co-directed a play at the competition, told Ho, “We want to show that migrant workers are not just doing dirty, dangerous work, but that they also have creativity and other talents.”

Besides being an outlet for creativity, the competition fosters growth in the careers of those who enter. According to Neyla Zannia, writing at the Singaporean blog The Online Citizen, “a number of previous contestants have gone on to showcase their work in Singapore’s literary scene, participating and collaborating with fellow artists such as the Singapore Writers Festival.”

Apriyani won $500 for her work. Better yet, second and third prize went to women as well: respectively to Naive L. Gascon for a poem about swimming, and to Fitri Diyah for one about her favorite weekend hangout spot. The United States Embassy sponsored the prizes.

Head over to Singapore Worker Poetry to read the winning poems.