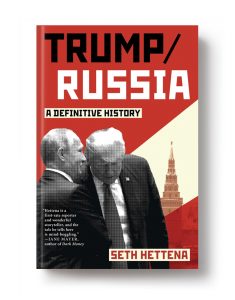 Yesterday, it was widely reported that Donald Trump knew more than he had at first let on about a 2016 meeting at Trump Tower. As we explained last week, the meeting, which included Donald Trump, Jr., Paul Manafort, Jared Kushner, and a “a group of Russians,” was intended to provide Trump’s presidential campaign with compromising info about Hillary Clinton, in exchange, it appears, for a future Trump administration’s repeal of the Magnitsky Act, a slate of sanctions against Russia’s kleptocratic oligarchy.

While the meeting has become infamous, the Russians who participated in it remain little known. It’s important to know who these people are. From the pages of Seth Hettena’s Trump / Russia: A Definitive History, here’s who’s who:

Natalia Veselnitskaya — A Russian lawyer, with Kremlin ties, employed by Denis Katsyv — one of the oligarchs targeted by the Magnitsky Act. Veselnitskaya assembled and led the team that met with Trump campaign officials. After the ill-fated meeting, Veselnitskaya worked with Glenn Simpson, founder of the information services firm Fusion GPS, to build a case for Katsyv’s release from sanctions. Simpson would later work with Christopher Steele on his infamous dossier.

Rinat Akhmetshin — A former KGB agent, and now a naturalized American citizen, who pays the bills by lobbying for Russian business interests in the US. Akhmetshin testified under oath about his role at the meeting before a Congressional hearing. Though not indicted for any crimes, he remains a likely person of interest in Robert Mueller’s investigation.

Irakly “Ike” Kaveladze — A California-based real estate agent. Kaveladze was revealed to have business ties to Aras Agalorov, the real estate magnate who financed Trump’s staging of the Miss Universe pageant in Moscow. Agalorov’s son, Emin, was a friend of Don, Jr.’s, and was instrumental in piquing his interest scheduling the meeting.

Anatoli Samochornov — Veselnitskaya’s interlocutor. It’s speculated that the main reason for his presence at the meeting was his being, as Katie Zavaldski put it at the Daily Beast, “a top-notch translator” with “a long track record of interpreting for governmental agencies and dignitaries, including Russia’s leading human rights activist and the U.S. State Department.” If anyone gets a book deal out of this, it really ought to be Samochornov.