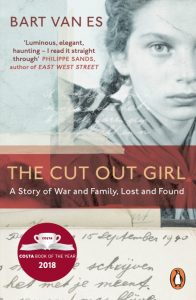 Prizes. They really matter in the UK. Win a prize and a book can go from selling a couple of thousand copies to tens of thousands in a matter of weeks, if not more. Gaby Wood, the Literary Director of the Booker Prize Foundation said at the Frankfurt Book Fair in 2016, as reported by Rob Garratt at The National, that a Booker nomination is “second only to an early death” in the stratospheric effect it has on sales. Career advice for wannabe authors: win or die.

The Costa Book Awards aren’t the Booker, but they certainly follow closely in its shadow and have a significant impact on UK sales. Every year, one “winner of winners” is picked from the books that win in each of the five prize categories. This year, these were Normal People by Sally Rooney (Faber) for the novel award, The Seven Deaths of Evelyn Hardcastle by Stuart Turton (Raven Books, Bloomsbury) for first novel, Assurances by J O Morgan (Jonathan Cape) for poetry, The Sklyarks’ War by Hilary McKay (Macmillan Children’s Books) for the kids selection and Bart van Es’s The Cut Out Girl (Fig Tree, Penguin) for biography. The category winners each received £5,000 (and it also costs each publisher £5,000 if their book is shortlisted, perhaps why no small publishers get a look-in).

Rooney was hot favourite, but the grand title was snapped up by van Es’s The Cut Out Girl, as chosen by judges Sophie Raworth, Prue Leith, Kate Humble and Simon Williams. A professor in Renaissance Literature at Oxford, van Es took away the £30,000 Costa Book of the Year prize on 29th January.

The book tells the true story of young Lien de Jong, whose Jewish parents hid her with a foster foster family in Amsterdam during the Nazi occupation. Raised by them and constantly living in fear and isolation, they eventually parted ways on bad terms and had no contact for decades. Discovering her own parents dead, Lien had to start her life over again.

Van Es is the grandson of de Jong’s foster parents, and too young to remember her fully from his childhood, but her story and the enduring family rift intrigued him enough to track her down in 2014, when she was back living in Amsterdam. Speaking with van Es, The Guardian’s Lisa Alladrice shares the story of their reunion:

What was meant to be just a cup of coffee and a sandwich with his “aunt” turned into a 10-hour conversation and then a month-long extended interview, in which he came to know her “in a way that I had never known anybody else. Even with your most intimate contacts, you would never normally say: ‘Tell me your life, your earliest memories; what was your room like when you were a little girl?’ It was just an astonishing privilege to have that with another human being. I think that is something that has changed me. It has made me a more empathetic person.”

The book isn’t just about the past, it makes some cutting observations about the state of the world today. As van Es told Allardice:

“It’s about modern Europe as well as about the war.” The book interweaves De Jong’s story with Van Es’s travels around the Netherlands – wartime archives, railway and petrol stations, motorways – during which he was struck by the impact of far-right politics there today, with figures such as Geert Wilders of the Party for Freedom (PVV) making headlines.

Famed for its tolerance, the Netherlands has “also got its nasty side”. Returning to his grandparents’ house, in what is now an almost entirely Muslim area, he says he felt uncomfortable researching a Jewish story. “It made me think, there’s a danger now that the world is becoming compartmentalised again in echo chambers of people who just tell their own stories. This is a story in one way about a non-Jewish person talking to a Jewish person, but beyond that about a person from the 21st century looking back at the 20th century.” If there is a message to the book, he says, it is that “you have to look beyond yourself, you have to have some larger vision, because in the war the people who acted, who did something for the Jews, were largely people who were part of organisations that spanned racial divides, things like my grandparents being part of the socialist movement.”

Described as “sensational and gripping—the hidden gem of the year” by chair of the judges, Raworth, the combination of moving personal history and social commentary along with the seemingly never-ending obsession of the book industry with Nazis has made this a winner. Juliet Annan, the publishing director of Fig Tree told Benedicte Page at The Bookseller that:

I’m thrilled that Bart van Es’s extraordinary family memoir has been recognised for the important book that it is. With its themes of displacement and family stories, this agonising but uplifting account of Lien de Jong, a young Jewish girl who was hidden by Bart’s family in the Netherlands in World War II, is totally relevant now. I’m so pleased that 85 year old Lien was able to come London and accompany Bart to the Costa Awards and see him win : a surreal and emotional and warm moment for us all.

According to Nielsen BookScan, in paperback the book has sold 3,300 copies. It is currently the number two bestseller on Amazon and Annan says a “sizeable” reprint is under way. Just wait for those sales to rocket.

Both de Jong and van Es attended the award ceremony together and gave heart-felt speeches on acceptance of the award, van Es saying he was “thankful to my amazing grandparents, who showed such bravery when others could not”. De Jong added: “Without family you don’t have a story. Now I have a story … Bart has reopened the channels of family.”