For all the talk these days about fake news and media consolidation, some journalists are in such demand these days that publications are going halfsies.

Pamela Colloff, executive editor and staff writer at Texas Monthly, has just signed on to be a joint journalist for both the non-profit ProPublica and the New York Times Magazine. Starting May 1, Colloff will be senior reporter at ProPublica and will continue as writer-at-large for The New York Times Magazine — and both publications will share Colloff’s content. According to Politico’s Joe Pompeo, her stories will appear exclusively on both platforms, which is a little mind-bendy for the term “exclusively.”

This is unusual; rarely do news outlets “share” a reporter in this manner. But if it were to happen to anyone, Colloff is a good choice; in her twenty years with Texas Monthly (the only staff position she’s held in more than two decades of journalism), Colloff gained a following for investigative, in-depth reporting, specifically on criminal justice matters. She’s also been nominated for six National Magazine Awards, more than any other female writer ever (she’s won once). Given this background, it’s not too shocking that New York Times Magazine editor Jake Silverstein (who calls her “Tenacious P”) poached her from his old stomping grounds at Texas Monthly, where he was formerly editor-in-chief. And it’s even less surprising when one takes into account the recent changes at Texas Monthly, which we covered last week — the forty-year-old magazine, under new ownership and a new editor, is moving away from investigative reporting to focus more heavily on lifestyle. 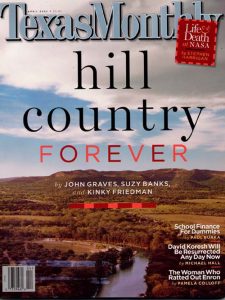 It’s difficult to say whether Colloff’s move is a reflection of Texas Monthly’s content shift, her insanely impressive and universally praised chops as a journalist, or some combination of the two, and this deal may not be a harbinger of things to come in journalism’s future so much as the once-in-a-blue-moon recognition of a master at work. A gushingly glorious feature on Colloff in last month’s Columbia Journalism Review lauds her as not only “the best damn writer in Texas” but “one of the lead architects of the magazine’s national reputation for in-depth crime reporting and long-form features,” even going so far as to label her “a virtuoso of longform.” And in that same story, Evan Smith, founder and CEO of the the Texas Tribune and another former editor-in-chief of Texas Monthly, describes her as “truly unique in the best way. In terms of the rarity of her toolkit, she is like a unicorn, chased by a chupacabra, eaten by Bigfoot.”

Colloff is not leaving the state of Texas; she’ll continue to report from her Austin home. And while this is a great deal for Colloff, there is no denying it’s a bad sign for Texas Monthly. In that same CJR piece, new editor-in-chief Tim “Texans don’t care about politics” Taliaferro is quoted as saying “we all revolve around her.” With the departure last month of website editor Andrea Valdez to take over at Wired.com, and with continued reports of staff disgruntlement, it’s possible that Colloff’s jump from Texas Monthly is just the start of a larger exodus.