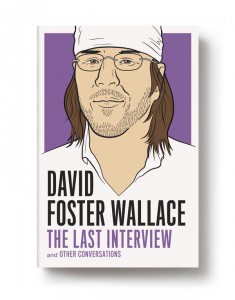 “The style of David Foster Wallace defies description in an age where the novel is constantly being threatened by the allure of technological advancement.” So begins this 1997 segment in which Charlie Rose, TV’s bafflingly age-proof mega-interlocutor, interviews the peerless novelist, essayist, and Last Interview series participant David Foster Wallace.

The two seem genuinely to enjoy the conversation, and Wallace, beneath the veneer of a huge reputation, comes across as straightforward, charming, vulnerable, and brilliant. It’s a blast to watch Rose grin wolfishly as he corners Wallace into giving his opinions on a series of movies, culminating in a fulsome explanation of the correct way to approach Scott Hicks, director of the David Helfgott biopic Shine.

At another point, Rose asks Wallace how he dealt with the critical adulation for Infinite Jest, and where he wants to go from here. “I think not exploding would be a start,” Wallace replies, and continues:

That kind of stuff… I dissociate very well and it’s a useful talent. Writing for publication is a very weird thing, because part of you is a nerd, and you want to sit in libraries and you don’t want to be bothered and you’re very shy. And another part of you is the worst ham of all time, look at me look at me look at me, and you have fantasies about writing something that makes everybody drop to one knee like Al Jolson or something.

Of course you never get it as much as that part wants, but to get a little bit of it is very, very strange…. I didn’t read a whole lot of the reviews, but a lot of the positive ones seemed to me to misunderstand the book. I wanted it to be extraordinarily sad, and not particularly postmodern or jumbled up or fractured. And most of the reviewers who really liked it seemed to like it because it was funny or it was erudite or it was interestingly fractured.

The whole interview is extremely worth watching: