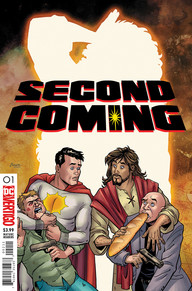 We are indeed living in the end of times! The Second Coming, a forthcoming DC Comics series inspired by the life of Jesus Christ, has been cancelled, according to Allison Flood at The Guardian.

Written by Mark Russell, illustrated by Richard Pace, and set to hit stands March 6 2019, the DC comic has been under attack by the ultra-conservative group CitizenGo, who call the comic “outrageous and blasphemous” in its depiction of God’s son, JC.

According to Flood, CitizenGo is a ” anti-abortion, anti-LGBT conservative campaign” that collected over 200,000 signatures for their petition against publishing The Second Coming. Their petition states: “Would DC Comics publish similar content about other religious leaders, such as Muhammad or Buddha? This content is inappropriate and blasphemous.”

The satirical series follows Jesus Christ on a “most holy mission by God” to figure out what it takes to be a “true messiah,” picking up cues from a superhero called “Sun-Man” along the way. In an exclusive interview with Syfy Wire, Russell and Pace discuss their relationship with DC Comics after the petition, and why they decided to request the rights of the series be handed back to them.

Russell continues on his own relationship with CitizenGo:

I first heard of CitizenGo … when they ran this silly campaign to get the buses in Portland to drop ads featuring lesbians. They would be completely ridiculous if not for the fact that social media’s anger-made-easy platforms give them access to cranks from all over the world. But it’s OK. Some enemies are worth having.

… I think the religious fundamentalists and critics who are trying to stop Second Coming aren’t interested in protecting Christ so much as their ability to control his narrative … They probably (correctly) suspect that it’s not Christ who’s being parodied, but themselves and how they’ve twisted his teachings of mercy for the powerless into a self-serving tool of the powerful.