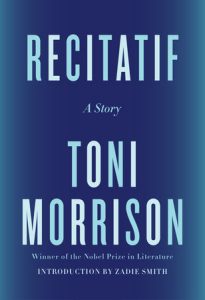 Toni Morrison fans, rejoice! On February 1, 2022, Knopf will publish Morrison’s short story “Recitatif” as a book. The rarely seen short story was originally published in a (now out of print) anthology in 1983. The book will feature an introduction by award-winning author Zadie Smith. According to the Associated Press, “Recitatif” was “written by Morrison in the early 1980s and rarely seen over the following decades,” and the plot “follows the lives of two women from childhood to their contrasting fortunes as adults.”

Praise for the book is already pouring in, with a starred review from Publishers Weekly calling the book “stunning” and a “compact powerhouse.”

When Morrison passed away in 2019, she was already considered one of the most celebrated American authors of all time. In her lifetime, she was awarded the Nobel Prize in Literature, the Pulitzer Prize in Fiction, The National Book Critics Circle Award for Fiction, the NAACP Image Award for Outstanding Literary Work, and the Presidential Medal of Freedom, to name a few. This December, The New York Times ran a poll that asked readers to nominate the best book published in the past 125 years, and Morrison’s acclaimed novel Beloved was voted as a runner-up in a tight race amongst other classics including 1984 and The Fellowship of the Ring.

With the publication of Recitatif, Morrison will join the ranks of celebrated authors whose never-before or rarely seen works were published posthumously. Some well-known examples include Philip K. Dick’s The Exegesis of Philip K. Dick, published nearly thirty years after his death by HMH, and Hans Fallada’s Every Man Dies Alone, originally published in 1947 just weeks after his death, and then translated from German and published in 2009 by Melville House.