Let’s face it, The New York Times has not really put its back into speaking out against the war that the Trump administration is gleefully waging on a majority of citizens in this country. But it has put in some elbow grease in an attempt to repudiate Trump’s claim that the paper of record is failing, specifically by introducing new revenue streams through covering wars of a different type. Wars we can all get behind. Star Wars.

The new venture comes in the form of a coffee table book, anthologizing the Gray Lady’s forty-plus years of writing on the film-franchise-cum-religion-cum-cultural-tidal-wave, from an early feature on George Lucas and his then-in-production space opera to reviews of the series’s latest installments.

Star Wars: A Chronicle From the Pages of the New York Times promises to be a thrilling gift for the person with the highest midi-chlorian count on your holiday list — complete with an option to have that person’s name custom-imprinted on the tome’s leatherette cover.  It costs a whopping $80 (well, $70 plus an added ten for the personalization), but as Andrew Liptak reports for The Verge: that’s less than a high-quality lightsaber. 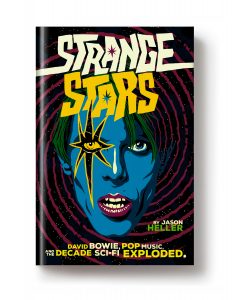 Or perhaps you’d rather read about George Lucas’s rock-and-roll roots, a wave of Star Wars-inspired disco artists that topped the charts in the 1970s, or other instances where the farthest vibrations of the cosmos were carried over FM radio waves? In that case, may I suggest you drink of the sweet sweet smoothie drawn from the sci-fi / pop music Cuisinart that is Jason Heller’s Strange Stars — coming in June from Melville House.