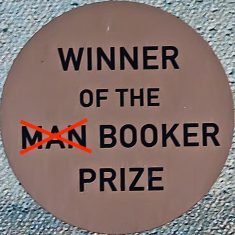 When one of the world’s most well-known literary prizes lost its main sponsor, conspiracy theories abounded. But the former Man Booker Prize has now found a new sponsor, a philanthropic organization known as Crankstart, founded by the literary couple Michael Moritz and Harriet Heyman.

Don’t worry, the Booker Prize Foundation won’t be appending that particular name to its prize, it’ll revert back to its original title, The Booker Prize (and the International Booker Prize, of course), by the time the Crankstart Foundation starts funding in June 2019.

According to Calvin Reid at Publishers Weekly, “The Crankstart foundation provides a variety of public support in the form of scholarships to low-income students, homeless initiatives, gifts to the ACLU in support of civil liberties and grants for the arts and journalism.” Moritz is a venture capitalist, who created Crankstart in the US. His wife, Heyman is a novelist and former journalist at the New York Times.

The Booker Foundation was left scrambling after the Man Group pulled out of funding the prize for good earlier this year, after 18 years of sponsorship. Reid includes the Foundation’s response in his article, sharing their excitement and relief at having a new sponsor just in time for the 2019 award season.

Helena Kennedy, chair of the Booker Foundation board of trustees, said the foundation is “thrilled” to have Crankstart as its financial partner. “Thanks to Crankstart, we will be able to continue the charitable activities of the Booker Prize Foundation, working with the National Literacy Trust in prisons, with RNIB to make the shortlist accessible to blind and partially sighted readers and in universities around the U.K.”