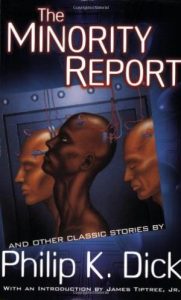 It’s tempting to think of the worlds of science fiction and business as completely incompatible. After all, some of our best science fiction helps us imagine the end of capitalism.

Businesses, however, are increasingly treating the genre as a sandbox for innovation. As Brian Merchant writes on Medium, this practice is largely thanks to Philip K. Dick’s Minority Report, which has inspired 100 patents, including the gesture-based technology that powers today’s touch screens.

A number of companies, along with a loose constellation of designers, marketers, and consultants, have formed to expedite the messy creative visualization process that used to take decades. For a fee, they’ll prototype a possible future for a client, replete with characters who live in it, at as deep a level as a company can afford. They aim to do what science fiction has always done — build rich speculative worlds, describe that world’s bounty and perils, and, finally, envision how that future might fall to pieces.

Alternatively referred to as sci-fi prototyping, futurecasting, or worldbuilding, the goal of these companies is generally the same: help clients create forward-looking fiction to generate ideas and IP for progress or profit. Each of the biggest practitioners believe they have their own formulas for helping clients negotiate the future. And corporations like Ford, Nike, Intel, and Hershey’s, it turns out, are willing to pay hefty sums for their own in-house Minority Reports.

That is, the “worldbuilding” at the heart of most excellent science fiction, can now be done for a consulting fee.

Of course, there’s more to it than just envisioning the future through literature and selling it to a major corporation. The world building firms must also flatter their corporate clients–casting them as the bold protagonist forging a path into the unknown days ahead (rather than a scourge of the planet).

I suspect that some of our better writers would struggle with that bit of counter-factuality. It seems, though, that in most cases the writers themselves will be left alone to practice their craft (making more money at it than through most publishing channels), then the consultants will manage the dirty work of pitching their ideas to the Fortune 500. Really, it’s not a bad writerly gig.

Still, I’d rather the science fiction writers among us start Rock and Roll bands instead.