A most literary Grammy Awards show… kind of There’s nothing like watching someone read from a book on national TV — just one of the thrills last night’s Grammy Awards show held in store for viewers.

During a brief interlude, pre-recorded by host James Corden, a star cast performed excerpts from Michael Wolff’s ultra-hot Trump administration tell-all, Fire and Fury. Readers included Cher, Snoop Dogg, Cardi B, John Legend, DJ Khaled, and, most notably, none other than Hillary Clinton. The set-up had Corden hosting auditions for the sure-to-be-forthcoming audiobook, already a shoo-in for next year’s Best Spoken Word Album award (this year’s went to the late Carrie Fisher, for her memoir The Princess Diarist).

The Grammys are now in their sixtieth year, and ripening into ever-deeper irrelevancy with each ceremony, but this segment, at least, was timely enough to put viewers in stitches. Many viewers, but not all. As Chloe Melas and Brian Stelter write at CNN, America’s UN Ambassador Nikki Haley tweeted her own fire and fury: 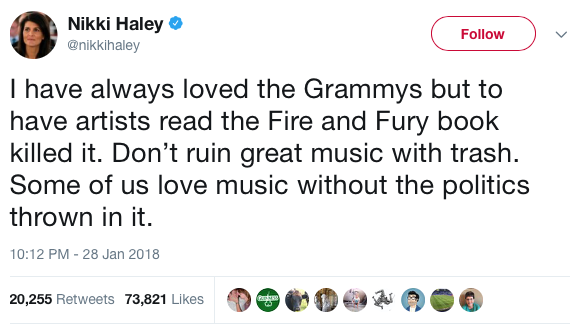 Well, see, Haley, there’s your problem. You might be the only American left who still loves what’s become a predictable, bleached-white sausage fest for the music industry.  Still, if you can count on America’s most tone-deaf awards show for one thing, it’s drama. Oh, and surprises. Remember Bono’s unscripted f-bomb in ’94? Remember when Janet Jackson’s invitation was rescinded following her infamous Superbowl wardrobe malfunction? Remember when Logic said he had not only finished a novel, but was already at work on a second?

That’s right, folks. At XXL, Peter A. Berry reports that the eerily Milhouse-resembling rapper and producer, whose suicide-prevention jam “1-800-273-8255” was up for two awards this year (Best Music Video and Best Song of the Year, neither of which he won), potentially dropped something hotter than a beat when he revealed that he’d recently finished the novel he announced last year, and was already working on a follow-up. “I just finished my first novel. I started the second one,” he said, before adding, “I just wrote and finished a movie that I’m really excited to star in now. I’ve been working really hard. It’s been amazing.”