A look at Bill O’Reilly’s children’s book, and novel of workplace revenge 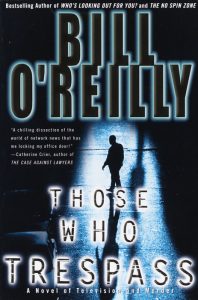 Bill O’Reilly’s novel may stand up as a potboiler, but Tolentino found it a nauseating read, knowing who the other is.

Bill O’Reilly may be, as his Twitter bio now states, “America’s bestselling historian” (ugh), but, being a man of many words, he had more literary wisdom to impart. We can thank two intrepid journalist for wading through his children’s book and his, ahem, novel of workplace revenge, so we don’t have to.

Nora Krug at the Washington Post takes a look at O’Reilly’s plea to children to use their manners, Give Please A Chance. According to Krug, the book is aimed at children ages three to six and “harks back to the good old days, when people held doors for others, nodded hello, minded their manners.” Which is, of course, rich coming from a serial sexual harasser. Krug writes that the irony is so thick, the book now reads like a parody.

The cover alone—an image of a little girl with an expression of exuberant begging, her hands clasped almost in prayer—seems ready-made for Stephen Colbert’s show.

Other images in this picture book include one of a little girl, partially clothed, asking if it’s okay for her to dress herself…. A hungry boy hovers over a plate of chocolate-chip cookies, his tongue hanging out in greedy expectation: “I really, really need a cookie!” says the caption. “Can we take them all?” asks a little girl of a litter of kittens. “Please?” Some of the children have already committed a no-no—a girl who has dipped her finger in a bowl of frosting, a little boy who has broken a dish—and are asking for forgiveness by saying “Please!” after the fact. Wink, wink.

Over at the New Yorker, Jia Tolentino dives into O’Reilly’s 1998 revenge novel, frankly gross in retrospect, called Those Who Trespass; it’s all neatly summed up in the headline: Reading Bill O’Reilly’s Old Novel About a TV Newsman Who Murders Several People After Losing His Job.

In short, “the main character is a violently bitter journalist named Shannon Michaels, who, after being pushed out of two high-profile positions, takes revenge on four of his former colleagues by murdering them one by one.” Tolentino describes the “unchecked lust for revenge and violence that permeates the novel,” and “the fact that a veteran newsman preys upon a younger female co-worker in the very first scene.”

The second sentence of “Those Who Trespass” describes Ron Costello, a correspondent for Global News Network, on assignment in Martha’s Vineyard and struggling with a “basic human need, the need for some kind of physical release.” Costello spots a pretty camerawoman at a party, happily notes that she’s had too much vodka, and approaches her with “intense sexual hunger.” Costello is “universally loathed” at his network, O’Reilly writes, but Costello doesn’t mind: “His energy was directed toward getting as much as he could of what he wanted. And tonight he wanted this freelance GNN camerawoman named Suzanne. He wanted her in a big way.” When Suzanne rejects Costello, he’s furious. (“Goddamn bitch. She’ll be sorry,” he thinks.) Then the vengeful Michaels kills Costello by shoving a silver spoon through the roof of his mouth and into his brain.

Tolentino’s discomfort with the book goes beyond its depiction of women.

On the whole, “Those Who Trespass” is a not a bad potboiler: a love triangle between a detective, a killer, and a journalist; a cat-and-mouse game through a series of four murders, culminating in a large explosion. There are some legitimately, if perhaps unintentionally, comical moments: at one point, O’Malley arrests a teen-ager in a gang called the Bitchin’ Boys. But the book is a nauseating read because you know, while reading it, that it was written by Bill O’Reilly. It feels transparently personal—in the acknowledgments, O’Reilly says that writing the book was a “harrowing experience”—and it’s full of recognizable pet ideas. Housing projects are “moral sinkholes”; inner-city children are “unfeeling predators.” A Latino detective succeeds in his department because “his strategy included overlooking petty crap like prejudice.”

As I said earlier, ugh.