A human conveyor belt of protest literature in Southampton

Human chains have been used for a variety of reasons – saving the lives of stranded swimmers, protesting terribly shitty immigration policy, rescuing puppers – but last weekend saw a first: a human chain to… move books down the street.

October Books, a radical/political bookstore located in Southampton, England, needed to move their wares from 243 Portswood Rd. alllll the way to 189 Portswood Rd. — an arduous journey that this map helpfully demonstrates. 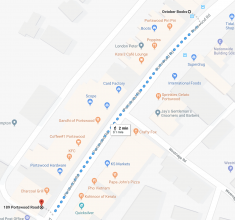 But for a store switching digs due to a rent increase, already in hock to the bank for their new location, hiring a moving van to take books 0ne-tenth of a mile was just not economically feasible. So, as Amy B. Wang at The Washington Post reports, the bookshop/independent cooperative turned to their best, longest-trusted resource: their customers.

“The idea of the human chain really came about because it didn’t need people to be physically fit or really strong,” Clare Diaper, one of the co-op members said. The store handed out fliers and created a Facebook event, generating some interest for the “Lift & Shift,” as they called it. October Books hoped for about 150 people to show up. Their expectations were dampened the morning of the move, when Southampton woke up to a cold, gray, downright dreary day.

But dozens of volunteers were already waiting in line.

As Wang reports, not only did October Books exceed its goal of 150 volunteers (they had over 200 people help out, connecting the old and new space “almost shoulder to shoulder”), but they moved all 2,000 books in just one hour – half the time they had anticipated.  And that’s not all the feel-goodness we get in this story. Laurel Wamsley at NPR.org reports that the volunteerism was, indeed, infectious: “Cafes brought cups of tea to the volunteers. People at bus stops joined in. Passersby asked what was happening, then joined the chain themselves.”

“It was really sort of surprising and positive, and just a really moving experience to see people chipping in because they wanted to help,” Amy Brown, a part-time staff member, told Wamsley. “And they wanted to be part of something bigger.” The new location of October Books opens this Saturday.

Ask A Bookseller: How do you move a bookstore?