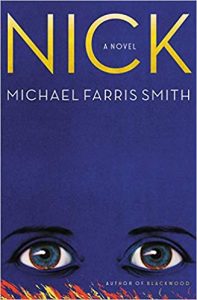 When we ring in the New Year on January 1, 2021–at the risk of stating the obvious: good riddance–we will also be toasting the expiration of The Great Gatsby’s copyright. And we will likely see a raft of new editions of Gatsby that first season Scribner no longer has it on lock.

But Little, Brown has found another way to catch the wave of Gatsby-mania. That’s because on January 5, 2021 they’ll be publishing a book called Nick–a Great Gatsby prequel by Michael Farris Smith focusing on Nick Carraway’s life before it became entangled (to use the phrase of the day) with Jay Gatsby’s.

Farris Smith, the author of novels including Blackwood, The Fighter and Desperation Road, said he had always been drawn to Nick Carraway as a character.

“His feelings on turning 30 and a decade of uncertainty before him have always rung true to my own emotions when I was the same age,” said the author. “And I still feel that way much of the time, torn between the revelations of what we discover in life and the abandon of those same discoveries.

The book’s UK publisher, No Exit Press, pitches Nick as being “charged with enough alcohol, heartbreak and profound yearning to transfix even the heartiest of golden-age scribes.” Perhaps in more ways than one, then, Nick is a book made possible by our exact moment in time.