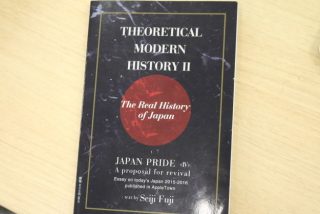 This year’s Asian Winter Games are due to commence on 19th February in Sapporo, Japan, featuring participants from thirty-one countries and regions. But just as athletes should be arriving, a dark slice of history has reared its ugly head.

The Olympic Council of Asia and the Chinese Olympic Committee have both requested that 230 Chinese and 230 South Korean athletes be moved from the APA Hotel in Sapporo because copies of a controversial and offensive book have been placed in guests’ rooms: Theoretical Modern History II — The Real History of Japan. The book, written by Toshio Motoya (using the pen name Meiji Fuji), president of the company that operates the hotel, denies the 1937-8 Nanjing Massacre ever happened and disputes Japan’s wartime sex slavery in Korea. As you might expect, the Asian media is all over the news, with reports in the Japan Times and South China Morning Post amongst many, many others.

The Nanjing Massacre is remembered as one of the darkest events of the last century. On 13th December 1937, Japanese troops captured the Chinese city of Nanjing (also known, before the advent of Pinyin, as Nanking), with soldiers of the Imperial Japanese Army murdering and raping tens—even hundreds—of thousands of Chinese civilians. The death toll is debated among historians but could stand as high as a quarter of a million.

Some Japanese officials and scholars deny the massacre ever happened, calling a Chinese fabrication despite ample historical documentation. New York Times reporter Tillman Durdin spent several days in Nanjing at the height of the horrors, reporting:

The conduct of the Japanese Army as a whole in Nanking was a blot on the reputation of their country.

Their victory was marred by barbaric cruelties, by the wholesale execution of prisoners, by the looting of the city, rapes, killing of civilians and by general vandalism.

Every able-bodied male was suspected by the Japanese of being a soldier…. Any person who, through excitement or fear, ran at the approach of the Japanese soldiers was in danger of being shot down.

A few weeks ago, a couple who stayed in an APA hotel in Japan were outraged when they found a copy of the book in their room. A video they posted to the Chinese social network Weibo has now had over ninety million views. Buzzfeed’s Ryan Broderick and Eimi Yamamitsu consequently got their hands on a copy of the book, and you can read their analysis here. It’s not pleasant. Besides his anti-Chinese revisionism, Motoya has also spouted classic anti-Jewish rhetoric, writing in his book that “Japan should use Jewish marketing companies to correct historical falsehoods,” and elsewhere stating that “Jewish people control American information, finance, and laws,” and have been in “in the background to American wars, from the Vietnam War to the Iraq War.”

And guess what else? Motoya is a Trump supporter, writing in the book that the president’s “radical statements have won over the ‘poor whites’ and non-intellectuals that make up the majority of the country… His presidency would be an opportunity for Japan to become a truly independent country.”

Buzzfeed attempted to contact the hotel chain for comment, and received in reply a formal statement that read, “In regards to the section in this book involving modern history, the author wrote based on theoretical opinions drawn out from analyzing numerous documents, not bound by the accepted views.”

But it seems it is ok to inflict one man’s opinions “not bound by the accepted views” on his hundreds and thousands of unsuspecting guests.

Although the hotel chain has claimed that it intends to remove the book from rooms in its Sapporo hotel “temporarily,” the Chinese athletes in town for the games will instead by lodged at the Sapporo Prince Hotel.

The APA chain operates 415 hotels across the world and has recently acquired forty new hotels in America. The company slogan appears to be “Always Pleasant Amenity” — yeah, I don’t find rape and massacre pleasant, thank you. I might pass.