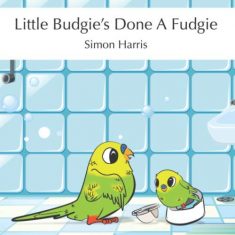 British blogger turned children’s author Simon Harris self-published Little Budgie’s Done A Fudgie back in January 2018. Almost two years later, and it has reached the dizzy heights of bestseller status, thanks to one woman’s angry tirade.

Harris wrote the book when he was potty training his autistic son back in 2017, to help him with the adjustment and make him laugh, also going on to successful use Budgie’s antics to train his daughter. The story is about Little Budgie who is old enough to stop wearing nappies, so with the help and encouragement of his mum, and after various failed attempts and reward ideas, Little Budgie finally does a fudgie in the potty. Harris explained his inspiration behind the book, as reported by Darren Boyle for the Mail Online, saying:

“My son Luke is on the autistic spectrum and he was taking ages to potty train, which is apparently a common trait.

“We went to a supermarket and were looking at potty training books but I couldn’t see any with an animal.

“I was spitballing all these potential words for poo and was thinking of rhymes like ‘dog on the bog’ but when I said ‘little budgie and a fudgie’ he laughed a lot so I turned it into a poem, which he really loved.”

Me and Luke read Little Budgie’s Done A Fudgie together a little while ago, so here it is. I just wanted to show you all that it is actually an innocent kids book and not the filth fest that Marjorie was kicking off about last night. Incidentally, she blocked me shortly after I told her that her complaint inadvertently pushed the book to NUMBER ONE on Amazon for potty training books. You can buy it at bit.ly/lbdaf2019

However, a woman from the US who recently bought the book, simply referred to as Marjorie, got in touch with Harris last weekend to berate him, claiming the book is “filth.” She wrote in her complaint:

“I purchased your book Little Budgie’s Done A Fudgie on Kindle today after seeing your post on Facebook, and while I was reading it to my little girl my older teenage son started giggling hysterically.

“I asked him what was so funny, and he told me what ‘Fudgie’ really means. It’s disgusting and you should be ashamed of yourself.

“I Googled it afterwards and on Urban Dictionary and have attached a screenshot.

“It’s hard enough to raise good Christian children in the USA in 2019 and keep them away from this filth without people like you subconsciously brainwashing them.’

“I have demanded a refund from Amazon and I strongly urge you to reconsider.”

This is in reference to the word ‘”fudgie” being slang for a sex act. However, it is also slang for feces, and, according to Urban Dictionary, for “A tourist to the northern lower, or eastern upper peninsula of Michigan, especially the Mackinac area.” Which do you think Harris was writing about?

On publication, blogger Rachel Bustin reviewed “It’s a thoughtful written story to help toddlers with potty training,” and A Mum Reviews said “It’s an encouraging book that all parents and children going through potty training will recognise themselves in.” Unless you’re Marjorie or Majorie’s teenage son, when you will recognise sex acts in a children’s book. Harris responded to Marjorie’s rant with the following:

“It’s an innocent kids’ book, not a filth fest.

“I’m very passionate about vaccinations and autism awareness and I’m used to getting abuse and dealing with vitriol and bile online—it’s an occupational hazard.

“I’m a massive believer in taking nasty experiences and turning it into something positive, when I read the angry message I just laughed at it.

“Marjorie is from the US, possibly from the Bible Belt, and was angry because she was convinced that ‘fudgie’ was referring to a disgusting sex act, which it isn’t.

“People are now actually buying it off the back of her comment, it’s a nice feeling to know the book is now an Amazon bestseller.”

Harris shared Marjorie’s angry response on his Facebook page Man Behaving Dadly, and his post went viral, helping to drive book sales. It seems your plan backfired Marjorie—turns out that for some reason, the good will of helping an autistic child’s development creates more sympathy than the sniggering jests of a teenage boy overly familiar with niche sex acts.