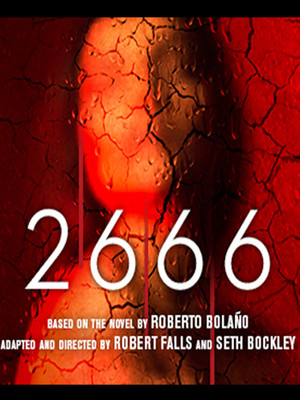 A couple years ago, we reported on the Chicago debut of a stage adaptation of Last Interview series participant Roberto Bolaño’s masterwork, 2666. With over 900 pages of text and a story that crosses continents, generations, and conventions, the project was one of the most ambitious ever envisioned.

One of the important plot points of 2666 is the epidemic of women’s mysterious deaths in a fictional town on the Mexico-US border, modeled after the very real Juárez femicides of the late nineties. The city subsequently became a center of brutal gang violence from 2008 to 2012, before once again erupting last January, with twenty-five homicides reported in two days.

In short, Bolaño’s work has not lost relevance since the book’s posthumous publication in 2004.

It comes as no surprise, then, that the Roy Cockrum Foundation, the project’s initial funder, recently released the full show as streaming video on Vimeo. 2666 was broken into three parts for its print publication, and the theatrical adaptation comes in four, but the story remains as sprawling and fascinating as ever.

As Jennifer Schuessler reports for the New York Times, the ongoing support of Roy Cockrum—a former monk, incidentally—is a bit unusual. It’s also a bit unorthodox to release a stage adaptation widely in video before bringing the production to other theaters. The “scope and technical complexity of the production… made subsequent productions difficult,” Schuessler writes. The video is a welcome solution for those of us who missed the run in Chicago.

You can catch part one below. For the whole production, click here and watch on Vimeo.