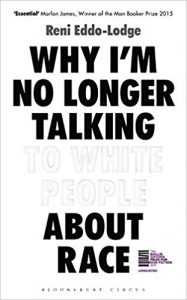 It’s clear by now the publishing industry has become, for better or worse, a more direct reflection of the larger world’s infatuation with this recent batch of Western leaders. Trump, Macron, Brexit, and the like are dominating bestseller lists as totally as our conversations. One important (and refreshing) side effect is an invigorated interest in voices not typically amplified in mainstream conversation. As Alison Flood writes at the Guardian, women of color—like British author Reni Eddo-Lodge—are being heard, given their due, and recognized for the impact their work has on our culture.

Eddo-Lodge’s book Why I’m No Longer Talking to White People About Race was just voted the most influential book written by a woman in the UK. Flood describes the selection process:

Academics, booksellers and publishers curated a list of the “Top 10 books by women that changed the world,” which was voted on by members of the public. Titles on the list range from Eddo-Lodge’s polemic on race to Virginia Woolf’s A Room of One’s Own and Anne Frank’s The Diary of a Young Girl. Eddo-Lodge’s book, which won the the Jhalak prize for the best book by a British writer of colour, received 12% of the public vote.

Eddo-Lodge was surprised by the honor, particularly in light of the older, landmark titles on the list:

“My book, less than a year old, is a baby compared to the titans and bona fide classics on this shortlist,” she said. “In fact, we need a few more years to determine if it’s really changed the world. However, I will respect this public vote. Thank you to all who voted for Why I’m No Longer Talking to White People About Race. I hope it instigates world-changing passion in my readers.”

While the list was curated by academics, booksellers, and publishing professionals, what’s most exciting about it is that the final winner was decided by readers. Flood also spoke with Alan Staton of the Booksellers Association:

“Issues of race and class, which too many of our political leaders and commentators are wilfully or unconsciously simply not attuned to, have made their way to the top of the news agenda – often through tragic and shameful circumstances. The strength of the public reception to Why I’m No Longer Talking to White People About Race—the type of book that ignites campus debate—and the fact that it has topped this Academic book week poll, offers encouragement that there are large numbers of readers willing to intelligently engage with these issues.”