Among the stracciatelle of Italian political parties, there’s one that manages to churn up special agita for two seemingly unconnected groups: the European left, and readers of American poetry. The openly Fascist CasaPound is named, of course, for the American poet Ezra Pound, whose “poem including history,” The Cantos, is among the most influential American books of the twentieth century. Pound’s commitment to Fascism ran so deep that he spent World War II in Italy working for Benito Mussolini (whom he nicknamed “the boss”), and after the war spent twelve years in psychiatric custody, having been deemed mentally unfit to stand trial for treason.

Fascism wasn’t just Pound’s day job: it permeates and animates his work. As the poet and critic Bob Perelman puts it in The Trouble with Genius, “What gives the best of Pound’s writing its power cannot be dissociated from the worst of it.” (Pound had his own take on things: “I lost my center / fighting the world,” he wrote.) What do we do with a writer like this?

2018 isn’t great, but at least, when we talk about literary writers with bad politics, they’re rarely big-f Fascists. This wasn’t so during Fascism’s horrific first wave, when plenty of great writers did, in fact, go Nazi. Philosopher Martin Heidegger, famously. Political theorist Carl Schmitt. While she was certainly no Nazi, the (gay, Jewish) poet and novelist Gertrude Stein responded to European Fascism in nuanced, not-always-great ways that have left a complicated legacy and occasioned extensive scholarly mopping-up. Norwegian Nobel laureate Knut Hamsun went all in on Nazism, and in 1945 wrote a eulogy in which he called Hitler “a warrior for mankind, and a prophet of the gospel of justice for all nations.” Let us say together: gevalt.

The Nazis loved culture. They used culture. They distributed culture…. While certainly all this is known (anti-Semitism, propaganda, and Nazis are often synonymous in the post-World War II era), it is productive to view it in light of the mid-twentieth century’s rapidly expanding culture industry. These phenomena… exploded to produce one of the largest meltdowns of that thing we call humanity.

Lovers of European modernism may have noted the absence of one big name from the preceding: Céline. (Nothing to do with this, to be clear.) Louis-Ferdinand Céline presents the brilliant-writer-who-is-a-Fascist problem in one of its purest iterations. On the one hand, he was a profound stylist, who kicked down the doors of literary French to make room for the rhythms of everyday speech, and who reflected on the existential challenges of industrialized life with the sickening clarity of an oil-slicked puddle. On the other hand, he was open about his contempt for Jews, praised Adolph Hitler, and took every opportunity to nudge the French government toward closer collaboration with the Third Reich.

Céline in his late thirties.

After the war, Céline was slightly rehabilitated. He fled to Denmark and was convicted in absentia of collaboration by a French court, before being pardoned and spending the rest of his life in the suburbs of Paris. His visitors there included the Jewish American poet Allen Ginsberg, who described him as a “dirty old gentleman of ratty talk.”

Back in January, we briefly noted that Céline’s French publisher, the venerable Éditions Gallimard, had abandoned plans to release a single volume containing three of Céline’s most notorious compositions: Trifles for a Massacre (1937), The School of Corpses (1938), and The Fine Mess (1941). Collectively, the troika is often referred to as Céline’s “anti-semitic pamphlets” — a name that’s somewhat misleading, as the three together comprise more than a thousand pages. The texts compare Jews to insects, praise Hitler, stoke terror for the wellbeing of the Aryan race, and name a very long series of names. It may be said that they demonstrate perhaps the lowest purpose to which literary genius can be put.

As French Nazi-hunter Serge Klarsfeld pointed out when the re-publication was first announced, these writings “influenced a whole generation of collaborationists who sent French Jews to their deaths.” While Gallimard, with the support of Céline’s 105-year-old widow, had promised from the outset to present the pamphlets “in their context as writings of great violence and marked by the anti-Semitic hatred of the author,” loud and growing protests quickly led them to withdraw the idea. “I am suspending the project, having judged that conditions were not right for ensuring a proper job in terms of methodology and history,” publisher Antoine Gallimard said at the time.

The case seemed closed, but Gallimard apparently wants to re-open it. This Sunday, speaking with France’s Journal du Dimanche, he made clear that “I have suspended the project, but I have not renounced it.” He insists that he wants to publish the pamphlets in a comprehensive, annotated edition, to serve as “important resources on French antisemitism.”

In remarks translated by Radio France Internationale, Gallimard continued, “The reason for the suspension was simple: you cannot build anything worthwhile when a fire is raging. You cannot make yourself heard in a boiling amphitheatre.”

“It seems to me that it is no longer possible to leave an entire sector of Céline’s writings out of his bibliography,” the publisher added. “The totality of what Céline chose to publish in his lifetime should be restored.”

Gallimard does have a point. Céline was, to be sure, a colossal asshole, but he was an asshole who had a huge impact on how we write and what we read, and his poison-hearted antisemitic tracts are already widely available online, loose of any editorial playpen. This is not necessarily to agree it’s a good idea to bundle them together and ship them to bookstores around the world, but declining to do so offers no solution to the larger problem of Céline’s influence. It’ll be interesting to see what happens. 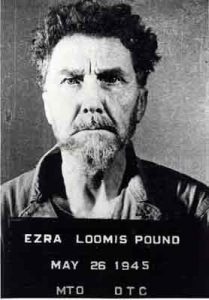 Pound’s mugshot from his 1945 arrest for treason.

As for CasaPound, ninety-two-year-old translator Mary de Rachewiltz, Pound’s daughter and primary apologist, has tried (and failed) to get the name changed in court. (“If he was here, Pound would say they need to go back to kindergarten.”) So racist that even Italy’s mainstream racists don’t want to be associated with them, they failed to win any seats in that country’s elections this weekend, in which the far right nonetheless surged, alongside the Ovid-loving Five Star Movement. Ah, Italia.

In unrelated news, the human intellect has, according to recent studies, “a profoundly mixed track record.”