Happy New Year! For now, we remain on hiatus. But, seeing as how internets gonna internet, we’re using this time to look back on some of our favorite posts from 2017. Here, Lynda Schuster, author of Dirty Wars and Polished Silver, writes about her development as a journalist. Originally published August 11th.

Short- or long-form, blog or book, writing has always been difficult for me. Which is odd, given my chosen profession of journalism. That journalists can, virtually on command, spew out reams of copy is a veritable article of faith. As a book editor once told me: The great thing about you reporters is that you write fast. Not well, but fast.

But the newspaper that first hired me in the 1980s, the Wall Street Journal, considered itself the paper of daily record only for business news. Back then, the Journal liked to scoop up what it considered promising young reporters directly out of college. “If you’re going to develop bad habits,” a New York editor said at my job interview, “we want you to develop our bad habits.” (This was before the Murdochs got their paws on the paper; things may have since changed.) So my first experiences with breaking news all came from the press releases put out by publicly traded companies.

When such a bulletin came flying into the office (by… fax), we reporters quickly had to discern whether it was actual news or just fluff, confirm it with the company that had issued it, and ask any obvious questions. Then we’d call it in to “the ticker,” the Journal’s business wire. Speed was essential; we were competing against Reuters. My first press release on my first day of spot news, as it was called, concerned a debenture — a word I could hardly say, let alone define. I called the ticker, and proceeded to pronounce it so that it rhymed with “Lincolnshire”; the person on the other end barely managed to suppress a giggle. Things, as you can imagine, only went downhill from there.

I soon graduated to covering foreign stories, but with scarcely better results when it came to making deadline. Relative to my fellow reporters, I had entire geological eras in which to compose and file my articles; such was the perk of working for a rag that liked its journalists to take the long view — especially on matters outside the US. The paper’s reputation for covering the world in a leisurely, almost after-the-fact manner did not go down well with other practitioners of my profession. When I arrived to report on a meeting of the International Monetary Fund in South America, the wiseass, cigar-chomping correspondent for the New York Times took one look at me and quipped, “Well, the story must be over. The Wall Street Journal just walked in the door.”

But even with all that time to write, I typically choked. English is such a capacious language: all those adjectives from which to choose, all those various verb forms to animate the action. That blank page on your computer just sits there throbbing in anticipation. My motto as a journalist was “Another day, another graf” — as in “paragraph.” Or, to quote (misquote?) the late, great sportswriter Red Smith, “Writing is easy. You just open a vein and bleed.”

So imagine my consternation at writing a book. A relatively long lead-time just meant months, rather than days, in which to contemplate. And agonize. And clean the kitchen. To say nothing of the bathroom. And, while we’re at it, the garage. To make matters worse, I was writing a memoir. Which I immediately realized—quick study that I am—requires liberal use of the dreaded first person pronoun! Now, there’s a reason I became a print journalist: to hide behind anonymity of a byline. I/we don’t exist. (Okay, maybe not to our current president, but that’s another post entirely.) 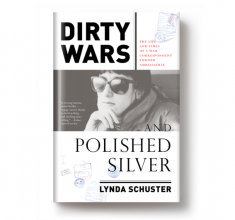 This is in stark contrast to my broadcast counterparts, a point that was underscored while reporting on the Falklands War between Britain and Argentina. (Which, because the Argentine government wouldn’t let anyone onto the islands, was covered by many of the correspondents from the hotel bar on the floor below the press office.) I was pulled out of Panama a few weeks into the seventy-four-day conflict to fill in for the Journal’s South America correspondent. Terrified at being thrown into a country and story about which I knew nothing, I spent two days scouring various news agencies and bookstores in Panama City to amass background information.

On my first morning in Buenos Aires, I walked by the open door to the hotel room of a correspondent for one of the major US networks — a preternaturally handsome specimen, I’ll admit. Instead of piles of clippings and literature littering the place, I saw not one, not two, but three—count ’em, three!—blow dryers perched on his desk. For him, it was all about the personal pronoun.

Maybe he should have written my memoir.