A sentence you don’t get to write every day: poetry and plagiarism are having kind of a moment together. This summer, UK-based investigator Ira Lightman tracked down uncredited lines from Maya Angelou, Dylan Thomas, and Tupac Shakur in some late work by former Canadian poet laureate Pierre DesRuisseaux. Around the same time, allegations came to light that poet Rupi Kaur had borrowed language unscrupulously for her insipid bestseller Milk and Honey. This all comes a few years after conceptual poet Kenneth Goldsmith, once the poetry world’s most respected advocate of plagiarism, accidentally torched the public effigy from which he had long proclaimed himself indistinguishable, with a ghastly, racist performance that reified longstanding concerns over what we may be talking about when we talk about “uncreative writing.”

Well, it’s happening again. Poet, critic, and W.W. Norton editor Jill Bialosky has come under fire for borrowing the language of others in her book Poetry Will Save Your Life, a critical anthology-cum-memoir. The issue was first called out in a write-up of the book that William Logan published this week in the Tourniquet Review.

Logan does not pretend to uncertainty about Bialosky’s gifts as a prose stylist. “The real problem,” he writes, “is that this book intended for adults has been written in a style that would embarrass a child of twelve.” Elsewhere, he observes, “The tone deafness of her prose is almost as wearying as the gush of clichés.” At one point, he says he feels he’s been “imprisoned in a poetry theme-park.”

Like a high-school freshman, Bialosky explains Wordsworth’s “I wandered lonely as a cloud” by simply rearranging his words. “In pensive mood, / They flash upon that inward eye / Which is the bliss of solitude; / And then my heart with pleasure fills” becomes “When the poet is pensive and his ‘inward eye’ recalls the daffodils, the memory fills his solitude with pleasure.”

The accusation of aping insight by rearranging words takes on darker implications later in the review, when Logan notes that Bialosky “has plagiarized numerous passages from Wikipedia and the websites of the Academy of American Poets and the Poetry Foundation,” as well as a passage from Helen Vendler’s Last Looks, Last Books. He offers a number of examples. He quotes this, for instance, from the Wikipedia entry on Robert Lowell:

Although Lowell’s manic depression was often a great burden (for himself and his family), the subject of that mental illness led to some of his most important poetry, particularly as it manifested itself in his book Life Studies. When he was fifty, Lowell began taking lithium to treat his mental illness.

And here’s a paragraph from Bialosky, with language identical to Wikipedia in bold:

Although Lowell’s manic depression was a great burden for him and his family, the exploration of mental illness in his verse led to some of his most important poetry, particularly as it manifested itself in Life Studies. When he was fifty, Lowell began taking lithium to treat his mental illness.

Instances where the language has been changed, Logan writes, show “the slight, guilty revisions of the serial plagiarist.”

In response, Bialosky has issued a statement:

William Logan has extracted a few ancillary and limited phrases from my 222-page memoir that inadvertently include fragments of prior common biographical sources and tropes after a multiyear writing process. This should not distract from the thesis of this book, which derives from my own life, my experiences and observations. I will, of course, correct any errors that are found for future editions of the book. 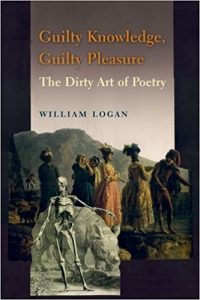 We’ve written about plagiarism a lot over the years; when Bob Dylan came under fire for similar trespasses in his Nobel Lecture, one of us ardently defended him. (It was me. I ardently defended him. I’d do it again. I wish Bob Dylan had won a second Nobel this year.) But the sense some keen readers have that Bialosky’s book is both intellectually high-handed and insistently trivial makes it harder to shrug off the seeming misconduct here. Simone White summarized these feelings in the New York Times this August, writing, “the notion that generates such an anthology-memoir, the idea that poems must be filtered through a scrim of ordinary language and life in order for us to commune with them, in order that they be ‘understood’ in some definite way, is wrongheaded and, indeed, condescending. Bialosky gets it, but you don’t?”

As for Logan, he’s no stranger to hard-edged criticism, or poetry sleuthing. Once called “the best poetry critic in America,” he has uncovered the identity of the guy who owned William Carlos Williams’s red wheelbarrow, figured out some really fascinating stuff about Shakespeare’s editing process, and determined once and for all that Billy Colllins is completely full of shit. (He’s also published nine books of his own poetry and six of criticism, and received a lot of recognition, including a National Book Critics Circle Award and the Aiken Taylor Award for Modern American Poetry.) We reached out to him with some questions:

ML: You told the New York Times’ Maya Salam and Matt Stevens this week, “My rule is, check basic facts when working on a review.” That makes plenty of sense, but did you also have some intuition that the writing wasn’t original? Surely you didn’t Google the entire text of the book in search of plagiarized passages.

WL: The writing on such websites is often pedestrian or functional, so I had no sense that Bialosky had engaged in any theft. There was no giveaway in style. I happened to open the Academy site for a cursory check of her facts on Robert Louis Stevenson — I like fact-checking. The odd parallel of “born in Edinburgh, Scotland” leapt out. Usually writers just say “Edinburgh” or “Scotland.” There were other parallels in the same paragraph. Writers who plagiarize don’t plagiarize just once. Within the hour I had a dozen instances.

I find this so perplexing — Bialosky could surely have read two or three of the kinds of biographical pieces she lifted from, and produced these short passages from memory. Do you have any sense of why a writer would cut so unchallenging a corner?

“I accidentally reproduced the prose from memory” — that’s the Coleridge defense, one of many that plagiarists use. It’s actually quite difficult to do. Read a passage quickly and then try reproducing it from memory a day later. Any writer who had that problem would be assiduous in comparing his later prose with his sources.

In your review, you point to the plagiarism you’ve discovered without exactly addressing what makes that plagiarism problematic. In all but a few cases, the copied language seems to convey little more than basic biographical information. What, to your mind, is the real harm in this kind of plagiarism? Why should it be called out?

Plagiarism should always be pointed out. It is very different from, say, allusion, where the writer hopes the reader will recognize the source. Plagiarism breaks the contract between writer and reader, the implicit contract that says, “These are my words and no one else’s.” Bialosky would have failed any college class where such plagiarism was detected. Why should we be harder on college students than on a respected editor who knows better? In a clause in any standard publishing agreement, the writer asserts that the work is his own, her own.

Had Bialosky simply cited the Poetry Foundation et al, it seems the whole scandal might have been avoided.

It’s not enough simply to “cite” a source if you’re borrowing the words. You have to put quotations marks around the phrases and sentences that aren’t yours. With such simple facts, it would be embarrassing for a writer to cite websites for long sentences — it would suggest that he or she had no inner resources as a writer.

How does it feel to have made a discovery like this?

I can’t take any pleasure in detecting a writer’s plagiarism. This is the third instance in forty years of reviewing, and I wish there had been none. Plagiarism is lazy and insulting, and having to write such a review is unpleasant.